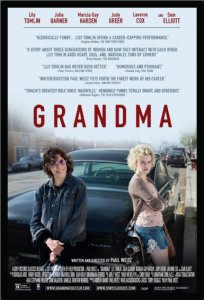 “Stop trying to be so mean.”

As a child, I was always fond of a sign that hung in my Grandmother’s kitchen. “When Mom says no, call 1-800-GRANDMA.” I’d say it and sneak a look at my Grandma, normally standing next to her stove preparing the Sunday evening meal. She’d give me a smile and a nod, body language that clearly read, “that’s right.” So, as I sat down for Grandma, I waited for that kind of moment. The relationship between grandparent and grandchild is entirely unique. One that, in my experience, is made up of total comfort. A warmness and a kindness. Which probably explains the frustration I felt watching this film. A great movie and a grandparent should both make us desire to revisit. To sit down and spend more quality time with them. Lacking any apparent thematic element, this is no such experience. Grandma asks plenty of questions; it just doesn’t have the time to answer. 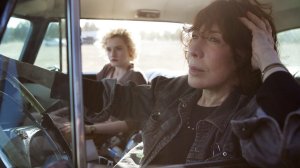 Elle Reid (Lily Tomlin) opens this story by breaking up with her much younger girlfriend. “You’re a footnote,” she says with a fixed and directed callousness. Then she cries in the shower, gets dressed, and goes about the rest of her day. Then she gets a surprise visitor in her callow granddaughter Sage (Julia Garner). The high schooler is pregnant, has scheduled an appointment at the women’s health clinic for that evening, and needs money for her abortion. Unfortunately Elle’s pockets are empty and has made wind chimes out of her recently cut up credit cards. Off they go about town, trying to collect old debts and ask for loans from people living in Elle’s past.

Elle is a selfish, damaged character. Perhaps the strongest aspect of Paul Weitz’s picture is its slow reveal of Elle’s past, shedding light on the recent loss of her wife Vi after 30 plus years of marriage. But because she is so cruel and blunt and insincere, always trying to be politically incorrect and sardonic, the film lacks poignancy. Tomlin is good here, sparking early buzz for awards consideration, and yet I’d argue that attention is undeserved. That’s not to negate her work either. At less than 80 minutes before credits, I have a terribly hard time calling this a feature film. There is a lot of story to be found here. For a movie that desperately tries to be personal, with such a short length, it’s mostly reduced to surface level. Tomlin’s role is showy, but I’m not sure there’s much gravitas there in the detail, or that she even delivers the film’s best performance.

That honor belongs to one of two people. Sam Elliott is Elle’s spurned lover, a man she briefly married and left with no explanation, and his lone scene is captivating. Then there is Marcia Gay Harden as Judy, Elle’s daughter. Like most people raised by free-spirited and liberal parents, Judy is stern and severe. The kind of work-obsessed woman who has a treadmill desk in her office. Judy is the most tinged character in this film, as well as the most emotionally complex. I’d prefer this had been called Mother and followed her. Not enough movies and stories are out there for actresses over the age of 40, let alone to lead a film. If only this one had been more appealing and less self-indulgent. Early in their travels Sage tells her Grandmother that she is, in her own Mother’s sharp and concise words, misanthropic. Grandma wears that description like a cheap graphic tee.

“You must not have a lot of friends.”