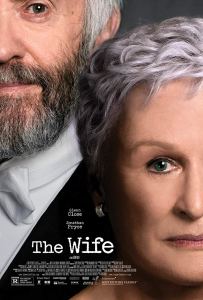 “Without this woman I am nothing.”

A modest, above average film with a few exceptional performances, The Wife proves to be forgettable and only faintly rewarding. It has a natural look to it, even though most scenes are as stuffy and stodgy as a stiff theater production, an attribute which leaves the overall effect of the film rather short-lived. There’s a massive difference between watching a movie and really seeing/experience a motion picture. I merely watched The Wife, and I’ve already forgotten everything outside its most integral pieces. It’s better at dodging punches than it is landing them.

Joe Castleman (Jonathan Pryce) has finally done it. After years of pouring himself into his work, he’s been awarded the Nobel Prize for Literature. It’s absolutely crucial to the story that he and his beloved wife Joan (Glenn Close) hear the news in separate spaces, he in the bedroom and she on the extension line. A party is held, Joe delivers a remarkably pretentious speech, their daughter Susannah (Alix Wilton Regan) and their son David (Max Irons) – a writer trying to escape the shadow of his father – come to celebrate the occasion. Then they’re off to Stockholm for the prestigious award’s ceremony. The Wife’s start is fast and absorbing, and like many time-tested marriages, begins to crumble the farther along it goes.

There’s a journalist named Nathaniel Bone (Christian Slater) who pesters Joe and questions Joan for the remainder of the film. Nathaniel knows something is awry, and Joe becomes contentiously heated anytime he’s close by. The Wife revolves around a twist that is as predictable a plot point as I’ve seen this year, ending the film on an unfulfilling, albeit ripe note. I’ve always struggled reviewing movies like this one, mostly because so little happens on-screen, and that translates to very little happening in the mind of the viewer. It’s decent and plain and too serious for its own good.

Many critics are saying that Glenn Close delivers one of the best performances of the year, which is baffling to me because it’s so uneventful. Her scenes are dominated by the men shuffling in and out her life, and not until the third act does she get to express any emotion outside of stifled angst. This is more akin to Lily Tomlin’s role in 2015’s Grandma, an over-hyped movie that you enjoy and forget altogether, and while Close is better in The Wife, she and the film are still nothing to fall in love with. What should have been a studied picture about the malleability of fame, the authorship of life, and the price of sacrifice instead becomes a monotonous yet well acted still-life portrait. It’s easy to admire for a bit, at least until you move on to the next piece in the gallery.

“I don’t think people give the spouse enough credit.”