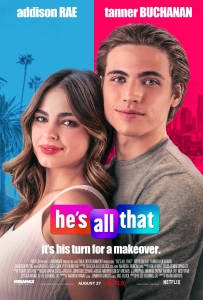 It isn’t all that good. It isn’t all that bad. It isn’t all that much of anything really. But He’s All That is a likable enough movie though, one that’s been appropriately updated for most modern audiences, and I think it will register well with the TikTok generation. There’s not a lot of heart or soul behind this movie, but it has enough choreography to keep things light and moving at an easily streamed speed. Netflix has pumped out way worse films than this one, and it at least seems to have a sense of honesty behind all of the phoniness. There’s a sincerity beneath the charade.

The film stars Padgett (Addison Rae), a social media influencer first and a high school senior second, and she’s a young woman who paints a vastly fraudulent portrait of her life for her countless followers. Dishonesty is her brand, and she does it to secure enough money for her college tuition, mostly because she knows her single mom’s career as a nurse can’t foot the bill. Padgett is unlikable at the start, but she earns our sympathy as the story progresses. Her motives are never gross or selfish; they’re about survival and becoming better. She’s not the mean girl you assume.

If you’ve seen the 1999 original, you’ll know pretty much every single beat that’s bound to happen in this revamp, and that’s not a bad thing either. If anything, the script’s predictability showcases just how well this film was cast and directed by Mark Waters, giving us a true leading man in the outsider Cameron (Tanner Buchanan) who works so well opposite the social celebrity Addison Rae (who’s acting could be improved upon but is better than I expected going in). There’s chemistry there, and that’s the foundation of movies like this one. The writing isn’t very good, but the actors seem to genuinely care for one another, and that makes the moments all the more real. It’s so much better than I expected.

Some scenes are cringeworthy to say the least. A few made my eyes water. The whole thing is pretty bad here and pretty decent there. Like most new romances, the picture lacks consistency and stability. But He’s All That manages to get past its egregious bits sponsored by big chains, and it makes sense that those moments are included, because the film is ultimately about being yourself in a landscape where honesty tends to get less likes. I would’ve loved this film as a teenager, mostly because it seems to really understand what the experience is like in the now. That’s an impressive accomplishment for a movie this small, this unnecessary, and this surprisingly good.

“Sometimes bold can be your bestie.”