“Do you have something to say?”

It’s not often that both the funniest and the most heartfelt pictures of the year coalesce as one, but I think that might end up being the case for CODA, a deeply emotional and empathetic endeavor that understands the vastly different yet shared journeys of life we all chart and trek, and it is without a doubt one of 2021’s finest films. I watched it twice over the course of 24 hours, and it only got better the second time around. It’s specific in its story, broad in its theme, and the honesty has the power to bring you to your knees. I didn’t hear a single false note. This is the rare type of movie worth championing and recommending ever chance I get. I couldn’t have loved it any more.

The film opens on a calm North Atlantic Ocean surrounding Massachusetts, slowly drifting in on a boat floating alone at sea. It looks shipwrecked from afar, but as the camera moves closer we begin to hear a voice. Someone is singing. She’s the rousing gem Ruby Rossi (an astonishingly talented Emilia Jones), working the family fishing boat with her dad Frank (Troy Kotsur) and her big brother Leo (Daniel Durant) during the early morning hours. Ruby drags out high notes with ease as the three drag nets behind the stern, singing out loud without having her talent heard or appreciated. Ruby seems to run the operation. We soon learn why.

On the surface, CODA is a movie about musical pursuits, but the title also means so much more. I have to admit I’d never heard the acronym Coda (Child of Deaf Adults) before, and the film blends the two readings of the word in one stunning piece of cinema. You see, Ruby is the only non-deaf member of the Rossi quartet. Just like her dad and brother, Ruby’s mom Jackie (Marlee Matlin) is also deaf. They’re unknowingly noisy and loud and it just about drives her crazy. She can scream out of frustration, but it’s met by empty ears. Ruby doesn’t want to be their ASL interpreter anymore, conjuring up big dreams of moving away and becoming a singer. The first step is signing up for choir. Maybe there she’ll finally find her voice. Finally find her why. Finally find her escape. 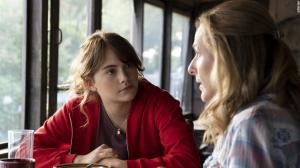 Ruby loves to sing; it’s practically her sole form of expression and the only time she gets to speak for herself. Choir is her elective of choice for this reason, and it helps that she’s so head over heels for Miles (Ferdia Walsh-Peelo), a fellow classmate who silently adores her from afar. Of course their teacher Bernardo Villalobos (Eugenio Derbez) decides the two should perform a grand, romantic duet. Of course they fall far one another. And of course the hiccups of life get in the way of a perfect sounding song. CODA follows all of the natural story beats you’d expect from a film like this, but it tells those moments through a world I’ve all too rarely been immersed in before. This is a film about the deaf experience, how it effects the non-hearing as well as those closest to them, and it’s a reminder that communication isn’t hard when you’re willing to really listen or see or feel another person. The sentiment gets through when it’s honest and true. CODA proves this at every single turn. 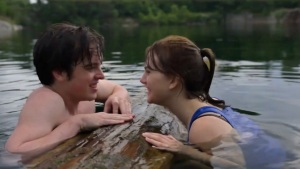 I loved the predictability of CODA’s script, not only because those sweeping emotional moments we yearn for eventually happen by the end, but because they’re allowed to play out both organically and therefore even more dramatically. We see them coming but are not exactly sure when they’ll hit, and it’s a testament to the direction and the adaptation from writer/director Sian Heder’s take of the 2014 French film “La Famille Belier” that everything works as smoothly as it does. It’s a comedy, a drama, a romance, and an impassioned film about listening to your heart without abandoning your head. The tone changes early and often but always make sense, and the third act will get you out of your seat. I’m not sure I’ll see a more effective and rousing picture in 2021.

Life is a song and a story, and CODA is an ultra specific example of the type of journey I’ve hardly ever seen on screen before. We all have a purpose, we’re all part of a community’s song, and this film realizes how important it is to understand and find your unique voice, then to ever so rawly reveal it with those closest to you. We’re all important pieces of a bigger collective. CODA assures us of such deeply human sentiments during its titural final moments, and every second the rest of the way feels masterfully controlled. It made me cry, laugh, think, and burst out in applause. Something tells me it’ll be the film I recommend the most this year. Rightfully so, and quite deserved. It’s about as good as they come.