“There can’t be two alpha Titans.”

Bigger, better, and more personal than any of the recently released Monsterverse movies, Godzilla vs. Kong is both a major improvement in this series of films as well as an example of this niche genre’s overall shortcomings. These kinds of expansive, sprawling, CGI fueled epics can only accomplish so much on a human level, and while it’s not without its own narrative faults, Godzilla vs. Kong capably blends the grandiose chaos with some honest and intimate catharsis. There might be too much movie tucked inside this one for its own good, but at least it mostly delivers on its titular promise, even if it does wave the white flag before all is said and done. It’s more of an reluctant armistice than a definitive battle of the Alphas.

Intentional and surprisingly effective opening credits reintroduce us to previous events from the earlier and more easily forgettable films, and serve as a segue into this picture’s often sardonic, sometimes borderline kitschy tone. It’s modern with the execution of its visual effects yet specifically dated with how they look, as if they’re sometimes tinged and clouded by cigarette smoke, and it makes for a movie that’s every bit as unique to the now as it is bound to the primordial past of these larger than life beings. For the first time in the current Monsterverse, Godzilla vs. Kong absolutely nails the tone throughout, and at times even feels sprite. It reminded me of Independence Day in the sense that doom and gloom don’t need to sacrifice fun and laughter. There’s a deft balance to it.

In all honesty, I can’t remember the last time I waited until the third paragraph of a review to even attempt tackling character introductions. And I think that’s why I enjoyed this film so much more than I did the others that came before. It helps to have Dr. Nathan Lind (Alexander Skarsgård) manning an impossible mission to Earth’s inner core for whatever reason. We’re semi emotionally sucked in by Dr. Ilene Andrews (Rebecca Hall) and the mute child Jia (Kaylee Hottle, who’s so great here) she voluntarily cares for and who has a non verbal connection with Kong. These three are – for the most part – the sails that guide this ship, and the epic battles between the two bruisers along the way serve as the current and the breeze. The narrative is grounded in humanity but fueled by sheer force from point A to point B. It’s simply fun to watch. 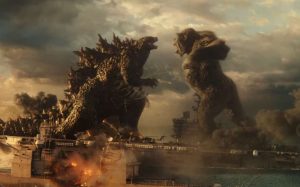 Building off the heaping piles of steaming shit that were the previous Monster movies, Godzilla vs. Kong unfairly starts in the negative because that’s the deficit it was handed by a bunch of poorly made, mismanaged blockbusters. And if I’m to be critical, the film feels like a two-parter that’s been edited and spliced down into one lean, often mean movie, where characters too easily galivant from here to there. The more minuscule moments driven by the young Madison Russell (Millie Bobby Brown) and the conspiracy theorist Bernie (Brian Tyree Henry) are fine and dandy, even though her sidekick Josh (Julian Dennison) is more annoying than he ever is funny and the ultimate bad businessman Walter Simmons (Demián Bichir) hardly factors into the equation. Their scenes only tie-in to the film’s scope in the broadest of ways, and the sequences tap on the brakes more than they ever accelerate them. These tangential storylines never coexist or weave together as one, and while fun, are more detrimental than they are positive.

Despite my harsh criticisms, it’s still so hard to deny the joys from a film as fun and as foolish as Godzilla vs. Kong. I felt like I was watching Michael Bay’s first foray into the Transformers universe. That movie was stupid, dramatic, exaggerated, and grounded by a Spielberg sensibility. So is director Adam Wingard’s effort here. We know where it’s going to go, that it’s bound to take a Batman v. Superman: Dawn of Justice route and never fully embrace the ultimate endgame repercussions of its title, but that doesn’t keep Godzilla vs. Kong from hitting the beats and nailing the moments most crucial to its success. It’s the kind of movie I wish I had seen in a packed theater, and I can’t say the same for any of the previous entries. For the first time in recent memory, Warner Brothers has finally delivered a roaring success from an independent filmmaker gifted a colossal budget. It might not make the most sense, but Godzilla vs. Kong gets the job done.

“There has to be another way.”