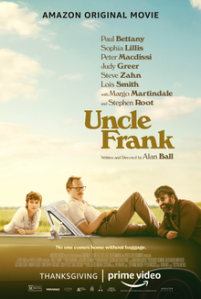 He sits in the corner reading and thinking. It’s the Summer of ’69 in Creeksville, South Carolina and Uncle Frank (Paul Bettany in a career best role) doesn’t kick back quite like the rest of his backwoods, La-Z-Boy brethren. It almost looks like he’s posing, either to possibly be sculpted by Rodin or to be the latest subject of a neoclassical portraitist. There’s something on his mind, some thought about the past or present or future lingering overhead. You can just see that he’s different, and from the very start, you can just tell that Uncle Frank is a different kind of story. Few films surprised me more in 2020. 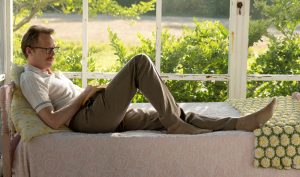 We first see Uncle Frank through the eyes of his niece Betsy (Sophia Lillis), a fellow family outsider with a proclivity for academia. She’s a straight A student pining to leave the trees and the hills of the Palmetto state, to possibly even visit New York City where Frank resides as an English Professor. Frank is a charming, kind, thoughtful man, and we’re left wondering why he’s treated so poorly by the family. Betsy doesn’t understand it either. But he makes sure to tell his niece that she – and she alone – gets to decide who she wants to be in this life. The message is heard loud and clear. 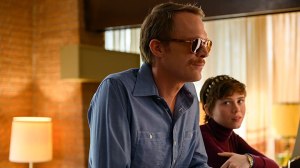 Following the first act we cut to 4 years later and find Betsy enrolling in classes at NYU. She now goes by Beth, obviously inspired by her Uncle’s argument to reinvent herself, and finally seems to blossom amongst her peers. It’s a sharp moment written and directed by Alan Ball – as is the entire film – and I’ll reluctantly bury the plot details from this point on, only because the narrative can be so surprising from this point forward. Going into this one blind allows you to see so much more of its subtlety, its humanity, and ultimately its empathy. It’s hard not to be moved by Uncle Frank, not just because it literally becomes a buddy road comedy, but because it mirrors the lightness with truly tragic circumstances. The writing here, despite a few awkward scenes, is superb. 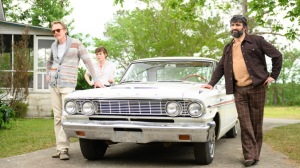 Uncle Frank is a film about grief, regret, and the baggage we all carry with us. And with this case in particular, such sentiments incur interest over time, making for an incredibly personal and emotional final act that weighs heavily on the head and the heart. But it’s also very funny (much thanks to the talented Peter Macdissi), introspective from Frank’s position of plight, and is so universally understanding from the way the open-eyed Sophia Lillis plays her remixed version of Beth. The ensemble is tremendous, spanning from characters who are free range bigots to those who are closeted as a result of their upbringing, with a few folks who don’t seem to care which way the breeze is blowing so long as happiness is the endgame. Uncle Frank breaks down walls, literally sympathizes with simpletons out of goof faith, and is willing to call out hypocrisy when it sees it. We should all do the same.

“We were all exactly where we were supposed to be.”