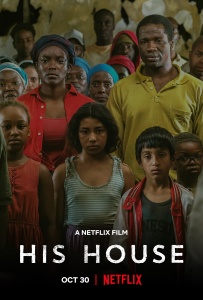 The undisputed best scary movie of 2020 – and one of the best pictures in these temultuous times –  is His House, a phycological thriller fueled by the terrors of PTSD and a horror house drama driven by the many confounding complexities of the racist and often rebuked immigrant experience. This is a film about what it means to feel unwelcome in a place of purported promise like the UK or other developed nations, to not trust the walls you sleep in nor the new land which you’re encouraged to claim as your own, and one where the grave actions from the past intersect and intervene with a refurbished now. His House is an unsettling, terrifying, enlightening piece of social commentary fit for the past and the present and the future, and it’s every bit as smart as it is shockingly new yet still so refreshingly familiar.

Sudanese refugee Bol (Sope Dirisu) and his pragmatic partner Rial (Wunmi Mosaku) flee the truly hostile horrors of the south on a rickshaw boat, navigating harsh waters seeking asylum. He’s an optimist, happy to assimilate and act accordingly in pubs alongside drunken white bums, more comfortable playing a stock part than he is reckoning with the gravity of his past. It’s no surprise he can’t sleep at night, that these unfinished rooms surround and haunt his soul. Bol strips the walls of paint and paper, and it seems as if it’s a physical manifestation of the turbulent thoughts wrestling about in his mind. Why would you, and how could you ever, make a home in a space where you’re so unwanted? At the same time, Rial experiences similar encounters with the supernatural, and she believes them to be manifestations of her cultural upbringing. Rial is rendered over by them. Bol rebukes them. It’s practically Poltergeist with more important socio-economic depictions and implications. The brilliance of writer/director Remi Weekes’ film is how the script creates a haunted house all its own, even daring to coax standard jump scares in the light of day. His House establishes real story rules without outright penning them, and it does this early on so that we understand what might happen when the laws are broken. Light switches are harbors of safety until they no longer block out the dark. Confusion shines in a labyrinthian new neighborhood, the brick buildings so shaped from the cookie cutter variety that you can’t tell one home from the next. These outsiders are more welcomed by the ghosts and the cockroaches sneaking away in the walls of their home than they are by the community, and they’re even looked down upon by a group of young black men. It’s easy for the government worker Mark Essworth (Matt Smith) to assure them that they are lucky to have such a big home. Bol and Rial get the keys to a tattered and dreamy new beginning, but they must make it through their shared nightmare first.

Devastatingly human and inherently specific, His House is a horror story unlike most others, and lends itself well to the trials and tribulations of what it means to survive in a home – in a place and a new land – when you’re never warmly greeted or welcomed. The performances are top-notch, the direction sublime, and the film hardly makes a single misstep. And what I loved most about His House is that the leads are culpable and openly complicit in the horrors which reside inside their home and their hearts. They must come to terms, must live with their choices, and the final shot is a shattering depiction of the weight carried on the burdened shoulders of refugees. That they stand tall shows their strength, their courage, their sorrow, their hope for peace and forgiveness. And how the grave decisions Bol and Rial are forced to make in inhumane situations are entirely unfair. Something tells me that’s the whole haunting point.

“Your ghosts follow you. They never leave. They live with you.”