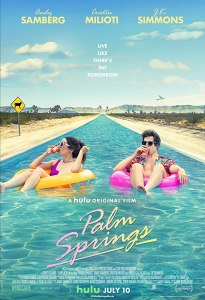 “It’s one of those infinite time loop situations you might’ve heard about.”

I have to be candid and admit that I simply do not understand the praise being lopped onto Palm Springs, a picture I found hollow and altogether impersonal, and one that was – for whatever reason – bought for millions at this year’s Sundance Film Festival. It’s a dull romantic comedy that lacks a realistic sense of love and a comedy full of lazily workshopped jokes. And, worst of all, it’s a film that really makes little to no sense. My first viewing left me wondering whether or not it deserved to be taken seriously. My second viewing assured me that it was nothing more than average at best. Disappointed is an understatement. 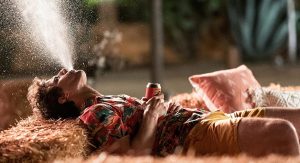 Nyles (Andy Samberg) wakes up to his annoying girlfriend Misty (Meredith Hagner), goes to the pool in Luau garb, cracks a few beers on his inflatable pizza float. He’s operating on his own clock. By the time the destination wedding reception kicks off, he’s drunk enough to watch the handsome Abe (Tyler Hoechlin) wed Tala (Camila Mendes), as well as woo the maid of honor Sarah (Cristin Milioti), who somehow doesn’t know her line of duty comes with an expected speech. The meet-cute between Nyles and Sarah proves to be anything but, and the film treats their caustic romance as a corrosive, impersonal, forced love story tying together two lost souls. It eventually works, but the beginning is like forcing opposite magnetic poles to touch each other.

Palm Springs is at its most amusing when we get to watch both of these wanderers find a potential home in the other, and it’s at its most entertaining when their banter evolves from a place of friendship to one where a forever relationship might actually organically spawn. Where time stands still and new leafs can be turned over. Yet the film doesn’t seem concerned with the nitty gritty details of its time travel dynamics, and instead places its focus on fleshing out the story rather than developing the two leads. How did Nyles get here? What makes Sarah follow him to the ends of the Earth? Why does the pointless, combative sportsman Roy (J.K. Simmons) even temporarily commandeer the narrative? Palm Springs doesn’t hold the answers to any of these questions. 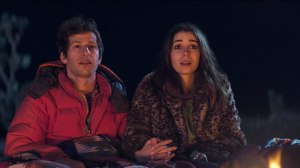 Max Barbakow’s direction services the bland story good enough, as does Samberg’s listless acting, but Palm Spring’s rare spark plug comes in the form of Crisitin Milioti, delivering the kind of confused and manic performance you’d expect from someone in a better picture wearing her same shoes; she is terrific in a sub-genre film entry which unfortunately falls incredibly flat. Palm Springs fails to optimize on its Groundhog Day conceit, replaying a day that doesn’t really matter to either of the leads, and refuses them the chance to grow or expand. What a wasted opportunity to say something or to say anything. It’s missing heart and heat and personality, and stands tall as 2020’s most overrated film of the year.