“I look forward to lying to you in the future.”

Just like the Washington D.C. outsiders infiltrating and pillaging the grassroots of real rural America, Irresistible comes across as a tone deaf political satire that’s blind to its immediate surroundings. Who is this movie for? What does it want to say? Why does it exist? The most basic of questions go unanswered. And yet what I found to be the most vexing is that writer/director Jon Stewart skewers the political realm piece by piece and puts them on a grill that’s out of propane. Irresistible packs the necessary flavors but lacks the pilot light and the fervor to transform them. It’s like a combination of Schitt’s Creek and Veep lacking the self-awareness or the fire to become something more.

Like so many blue-blooded Democrats following the results of the 2016 Presidential election, the left-leaning political strategist Gary Zimmer (Steve Carell) sees a flicker of hope in the form of a YouTube video. It features retired Marine Colonel Jack Hastings (Chris Cooper), delivering an honest, apparently off the cuff speech based and built upon the principals of the late Frank Capra’s American Idealism. He speaks to the establishment for Wisconsin’s corn belt everyman. The clip goes viral, Gary sniffs out his next primary target, and an introverted Mayoral campaign grows extroverted legs. It all snowballs on purpose, and builds to nothing in particular.

Mild-mannered in one scene, toothless the next, and altogether too unhinged and gummy for its own good, Irresistible tries to dissect the current political realm with jittery hands, playing a foolish and potentially dangerous game of “Operation.” There’s a buzz when the greedy Gary is literally patronized by local bar patrons. Another when he fails to hit it off with Jack. A few more as he is immediately embraced by names and places he couldn’t care less about, and faces off once more against his manipulative adversary Faith Brewster (Rose Byrne). Gary is a selfish, sociopathic man, and the film would’ve been better off had he been an ancillary character instead of the protagonist. He’s so very irritable. So is the film. 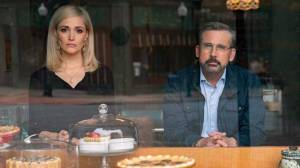 Late in the third act of Irresistible, we hear the words, “Sometimes good people have to do shitty things in service of the greater good.” It’s one of the rare instances when the film takes a firm position, where it decides to put its weight behind a gravely serious statement. Outside of these few inspired scenes though, Jon Stewart’s lethargic latest stands out most for being written and directed from the privileged position of an already elevated soapbox. Irresistible undeniably has something to say. It’s too bad its actions matter less than its words, and that it’s every bit as muddled as 2012’s Promised Land. The satire is soft, the drama weak, and the comedy mild-mannered. You might as well watch it on mute.

“Anybody cane make a speech. The real test is backing up your words.”