“Eventually your life together is what you’ll have in common.”

There’s a soft, strategic, stumbling beauty about Tigertail. It’s a movie with a melancholic musicality and it’s methodical in its approach to telling a generational saga from start to finish. There are some faults though, often showcased by an abrupt script that’s more interested in narrated action than it is deep character development, and despite the splashes of brilliance and the few directorial flourishes, it never graduates into the level of cinema it so clearly aspires to reach. Overall, Tigertail is a moving film that skips more beats than it lands. It doesn’t run a perfect race, and as the film suggests throughout, few things in life really ever test the boundless limits of forever. I admired the willingness to try.

Tigertail is the life story of Pin-Jui (a sound, sober Tzi Ma), an aged Taiwanese man comfortably nestled into his idealized version of the American Dream, struggling to connect with his daughter Angela (Christine Ko). He’s the narrator here, looking back at the impoverished rice fields from his youth where, presumably, his first lasting memories were made. Pin-Jui was a dissident, sent away from his widowed mother to live with grandparents. There he came across Yuan, a young friend with whom he romantically reengages years later as young adults, sparking the kind of fire that can only be fueled and sustained by true love. But Pin-Jui wants more out of life besides working in a factory with his mother Minghua (Yang Kuei-Mei) and sleeping in their barren abode. Opportunity comes and Pin-Jui must make an impossible choice: stay and foster this relationship or leave for America in an arranged marriage with the promise of a better life. 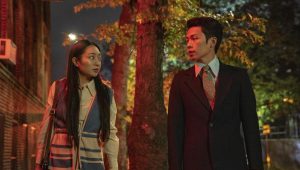 While the opening chapter is quite abrupt, Tigertail starts to take shape after landing in America, giving the film the space to explore its own identity while also tackling the ways we can so easily lose it. The course of time is captured wonderfully in this segment, showing how the questioning of happiness and the monotony of routine can lead to carelessness with relationships, ultimately resulting in disdain. And the movie just looks so handsome in these spots of true uncertainty, colored with the kind of evocative greens and harsh reds found in Wong Kar-Wai’s moody, masterful In the Mood for Love, which I’d bet good money served as a great source of visual and narrative inspiration for writer/director Alan Yang’s debut feature.

You might recognize Yang’s name from his association co-creating the brilliant Netflix series Master of None. He made strong creative decisions in that studied depiction of Gen Z life and relationships, so it’s unsurprising he does here as well. I was admittedly put off by the open and its use of fast subtitles set against a blank black screen; the negative space doesn’t get to linger enough. After careful thought though, what feels like a grating choice becomes a literal depiction of a painful memory, representing closed eyes narrated by words that are followed by what occurred, showing how time can transform memories into mirages. This seems like a calibrated decision, given how wide-eyed and lived in these whittled down, back pocket souvenirs become as Pin-Jui opens up his old and stubborn mind to the surges of emotions brought on by recollection. Tigertail could have used some work structurally; a profound moment towards the end is tailor-made to suit the open of a film so dressed up in the past. And while it packs an emotional punch, I couldn’t help but feel as if it were somewhat too lofty and thus incomplete. What we get from Yang’s obviously personally tale is enough though, and Tigertail is the sign of a burgeoning filmmaker bursting with ideas and talent.