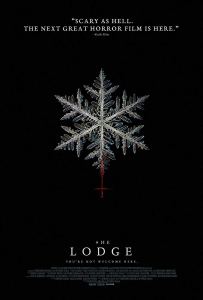 Profound grief and emotional dissonance highlight the internalized horrors of The Lodge, a film where the scares and the terrors are of their own macabre, childlike creation. Much like their eerily similar and perplexing debut feature Goodnight Mommy, the Austrian writers/directors Severin Fiala & Veronika Franz once again stoke the embers of personal fires in cold, calculated, cabin fever settings, daring the darkness in the characters to play the part of the big bad monster. And with The Lodge, the joint filmmaking duo prove themselves to be quite talented and prolific when it comes to the horror subgenre of psychological manipulation. They make hard, distressing, open-ended movies where every answer begets a new question, and where you find yourself still postulating possibilities hours later. What a devilish, decadent treat to chew on.

Aidan (Jaeden Martell) and his little sister Mia (Lia Mchugh, a relative newcomer destined for very big things) are the family lodge’s gatekeepers, dreading the harsh Winter holidays. And they have every right to. They’ve experienced the immeasurable loss of their mother Laura (Alicia Silverstone) in the hardest way possible, and their father Richard (Richard Armitage), a researcher and writer, is intent on marrying a new woman. She’s Grace (Riley Keough), a visual carbon copy of Laura. Grace is younger, introverted, and an online search by the kids finds that she has a hidden history. I admittedly didn’t know that Silverstone was in this film and thought her first scene was Keough donning makeup to look a a few years older; the inspired casting director deserves a nod for how uncanny the two are. Their faces help convince us of the blur between reality and make believe that’s to come.

What I’ve enjoyed about Franz & Fiala’s films thus far is that they tell primitive, predatory horror stories with a horticulturist’s sense of precision and management. The cuts between the scenes matter. Line delivery is crucial. The claustrophobic composition of the picture adds shades and depth. What’s there and what’s not makes a noticeable, questionable difference. The Lodge creates a snowglobe world but doesn’t define its rules or its easily shaken motives, and reminiscent of their fellow countryman Michael Haneke, the duo deeply understand how a lingering shot can tease and materialize terror in ways a jump scare simply cannot sustain. The slow and steady pace towards madness can be the most petrifying race of all.

A few elements don’t quite add up to anything substantial: the script takes the act of gaslighting to a literal and questionable level, and the constant juxtaposition between reality and a doll house never works as well as it did in the occultism of Hereditary or the ghostly affects of the Netflix series The Haunting of Hill House. But I have to say that this terrific Tundra of a film – so unsympathetic and so deeply upsetting – stays true to the established aesthetic of two talented filmmakers who are willing to lock their audiences in a walk in freezer before explicitly exposing them to the effects of indoctrination, sometimes by fire. The picture tackles extreme belief systems full of religious fervor, counters them with attempted nihilism, and finds its way in a place of blatant self-flagellation. The Lodge is meant to be a posthumous provocation and an intentional smear on the fine line between what’s right and wrong, what’s real and fantasy. So hunker down in the blizzard and try to see it for yourself. It’s an uneven and treacherous film, and it’s every bit as disquieting as it is chilling.

“Nobody knows where we go.”