“There is always something you can do with the mad that you feel.”

Therapeutic, life-affirming, and deeply religious without ever relying on preaching, A Beautiful Day in the Neighborhood is both a gift and a reminder for our modern world to slow down and to listen. To look into a person instead of blindly looking at them, to actually mean the words that you speak, to express the raw feelings that you really feel. To love with open arms and to embrace with a hearth of warmth. To forgive those who wrong us. A Beautiful Day in the Neighborhood – bolstered by its documentary piece Won’t You Be My Neighbor? from last year – might be the most important and necessary film of 2019. 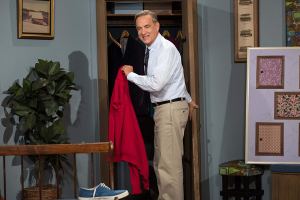 The movie immediately recreates and embraces the whimsical, almost alien nature of television host Fred Rogers (Tom Hanks, playing a man I’m not sure anyone else could have portrayed). He jaunts through the door, trades a suit coat and dress shoes for a red sweater and sneakers, all while smiling and singing. Mister Rogers speaks slowly, in a cadence practically sounding out each syllable, giving the many kids at home time to understand his words; he always talked to the children, not down at them. Is it all an act, though? Is Fred Rogers playing a character, or is he the same man both on-screen and off? Can this level of genuine kindness escape the pitfalls of fame? These questions – among others – are answered with a bright-eyed look, a hallmark hello, and a soft handshake where Fred places his left palm on top for good measure.

Lloyd Vogel (Matthew Rhys) – a journalist for Esquire magazine who’s well-known for his cynicism – isn’t convinced by the charade, so he pays Mister Rogers a visit for a profile piece he’s been assigned to pen. 400 words on a hero. It’s an upending, tumultuous moment for Lloyd, a grown man still needing to learn life skills taught during Fred’s program. Lloyd is married to Andrea (Susan Kelechi Watson), an understanding woman and new mother to their baby boy. He’s detached from his sister Lorraine (Tammy Blanchard), mourns his late mother, and loathes his father (Chris Cooper), an embattled and now gravely ill man who deserted the family years ago. Lloyd latches to the ill-will and the hate, a quality that’s shaped his interview style, and so it makes sense that the opinionated cynic, known to ask hard questions, is thrown for a loop when Fred flips the script. Mister Rogers is concerned for Lloyd’s well-being in ways that cannot be faked. It may seem earnest, but it is wholly authentic.

In her third directorial feature film, Marielle Heller – whose past movies The Diary of a Teenage Girl & Can You Ever Forgive Me? didn’t bowl me over like most critics – has achieved something quite brilliant with her latest endeavor. Some of that credit has to go to the ambitious script from co-writers Micah Fitzerman-Blue and Noah Harpster, who dared to defy the conventions and the limitations of the standard biopic by melding the real world with Mister Rogers’ storied, unforgettable Neighborhood of Make-Believe. Whereas most films would use generic establishing shots to show a change in location, this one opts to display place and travel through the design of the very basic sets on Fred’s show. It’s a genius creative touch painted onto an already unblemished picture, and Heller’s considerate, careful insight behind the camera only further elevates A Beautiful Day in the Neighborhood into the kind of space where you want to live, to raise a family, to grow up and to eventually grow old. And while it may be an overly and overtly idealistic picture, it at least reaches for ideals rooted in the most important four letter word of them all. Love can speak volumes, especially when actions supersede words. 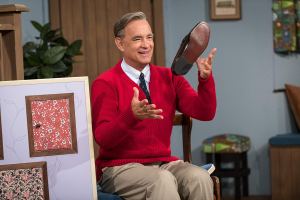 A Beautiful Day in the Neighborhood has two scenes which, independently, rank among the best moments in any film I’ve seen this year. The first can be found in the trailer, as Lloyd and Fred ride the Subway, the passengers all joining in unison to sing “Won’t You Be My Neighbor?” Man, woman, and child all know the words; his message of kindness must resonate. The second comes later on while the two men dine at a restaurant. Fred asks Lloyd to submit to sixty seconds of silence and to think about those “who loved him into existence.” The room goes quiet, Lloyd’s trauma bubbles behind his eyes, and the camera zooms in on Fred’s fixated gaze. In this moment, Fred – an ordained minister – is practicing the sacred act of reconciliation out in the open, opting to listen and to be generous with his time instead of prescribing any kind of penance. A Beautiful Day in the Neighborhood encourages kindness, emotional perceptiveness, and creates an optimistic home where all are welcome and none are rendered hopeless, because a neighborhood of any size is only as warm as those doing the living. This one’s ablaze with goodness and reciprocity the likes of which have become uncommon. Maybe the movie can inspire us to change that.