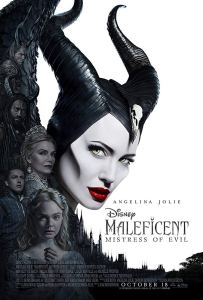 “You may remember this story.”

When you boil and distill Maleficent: Mistress of Evil down to its most essential parts, it’s really no surprise that the film tries to be so Shakespearean, and that instead, like a Fall season’s candy apple, it’s a sweet story covered in an impenatrable, all too sugary shell. Unfortunately it takes too many licks to get to the center of this Tootsie Pop. The film is full of classical dramatics and all the trappings of modern Disney product placement, making for a picture that feels timeless but that also exists in a garish CGI landscape first and foremost meant to sell merchandise. The end results are constantly and consistently clashing.

The only part of the film worth recounting is the insubstantial plot, since the message of the broader story itself is so amorphous. Princess Aurora (Elle Fanning) rules over the Moors while Maleficent (Angelina Jolie) is protector of the land, still so very terrifying to townspeople with her magical powers and disquieting demeanor. Prince Phillip (Harris Dickinson) continues his pursuit of the outsider Aurora from the first film, asks for her hand in marriage, hoping to marry both sides together through peaceful understanding inspired by that of his considerate father King John (Robert Lindsay). Turns out the scheming Queen Ingrith (Michelle Pfeiffer) might have more than a few opinions about the matter, all driven by her zealous hate and prejudice.

Admittedly, while the film runs rather long, it never really drags to a complete standstill. There are enough new faces and landscapes here that you don’t have time to take a breath, but the main problem is that this movie never does anything surprising enough to make you hold it. I also questioned the hammy title, because Jolie’s Maleficent is nowhere close to the main character, often having less screen time than many of the more futile counterparts who resurface and those scattered throughout. That includes Maleficent’s abrupt introduction to two of her fellow fairies, the admirably kind Conall (Chiwetel Ejiofor) and the warring Borra (Ed Skrein). Yet then again, neither are given the chance to add much to the respective roles outside of their mere presence. It’s all for show.

As is typical of most big-budget sequels anymore, Mistress of Evil builds and expands outwards before it first takes the time to look inwards, forgetting to determine and to capitalize on the dark, ominous undertones which made the first film such a profitable hit. So even though I found 2014’s Maleficent to be as middling as Disney’s latest live-action adaptations come, it at least had the presence of mind and the prescience to rewrite a classic tale from an antagonist’s point of view. Conversely, Maleficent: Mistress of Evil is exactly what you expect, and director Joachim Rønning’s visually impressive movie is so devoid of honest emotion or any real resonance that it never amounts to anything substantial. This is a film that’s been stroked by a Midas touch and brought to a standstill by a Medusa stare. It looks like gold, but man is it a lazy, lifeless piece of bedrock.

“It’s nothing of any real consequence.”