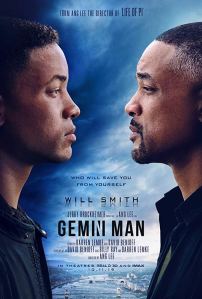 Ten months into the calendar year and I’m not quite sure that I’ve had a more disappointing time at the cinema than I did while watching the truly abysmal Gemini Man. It’s a boring, nonsensical, ruthlessly dumb picture. And while I didn’t expect all that much from the risible trailers, I still came out feeling bad that so much talent – both in front of and behind the camera – had gone to waste. Gemini Man has been built from the recycled remnants of films past, and by the time the movie finally ends, you come to realize that those parts were once leftovers for a reason. It’s one of the worst films of 2019.

The less said about the Gemini Man’s perplexing plot the better. As the star of the picture, Will Smith plays Henry Brogan, an assassin who’s past his prime, quitting after his conscience nearly makes him miss a shot. He’s set up, goes on the run from the agency trying to finalize his retirement for good, and meets the beautiful agent Dani (Mary Elizabeth Winstead) along the way. Yadda yadda yadda. Been here, seen that. The curveball thrown in the picture is just as perfunctory and unsurprising, finding the film’s villain Clay Varris (Clive Owen) to have made and sent a genetic clone of Henry after himself. It’s bad enough that the movie offers little insight into Brogan’s past, but Varris might also be one of the most unmotivated bad guys in recent memory to boot. There’s no depth to this hollow, hobbled blockbuster.

Clearly pulling from the Jason Bourne series whilst trying to force the sexuality of something like True Lies into the fold, Gemini Man has a story full of big ideas that’s told with a small-minded sensibility. I liked that – as any sci-fi flick worth its salt should – the movie addresses heady, futuristic concepts such as mass cloning from a fairly grounded and gritty approach, even if the performances aren’t given much space for growth. It’s not a brain-dead, lights on with nobody home situation. The big problem is that Gemini Man takes itself so seriously when the picture literally looks so exaggerated and goofy. There’s a massive disconnect between the aesthetic and the tone of this film. Which is why it came as no shock to me that I wrote down, “this ending feels like X-Men Origins: Wolverine,” only to later find out that David Benioff had a hand in penning both scripts. Yes, Gemini Man really is that bad, and is perhaps Will Smith’s worst film since the indefensible Collateral Beauty.

That falls on the shoulders of Ang Lee, one of the most intimate directors of the 90’s (Eat Man Drink Woman and The Ice Storm are nearly unparalleled works of art), and who’s since then been a hit-or-miss auteur who tends to strike out when he swings for the fences. His recent filmography runs the gamut of modern cinema. He made the clunky and lumbering Hulk, then crafted the masterpiece Brokeback Mountain, followed that with the tantalizing Lust, Caution, and somehow landed in the director’s chair of the instantly forgettable Taking Woodstock. But his last two films have been the most polarizing because, to be frank, the quality of the narrative has played second fiddle to Lee’s fruitless attempts to create a new cinematic experience. He shot this and the equally dull Billy Lynn’s Long Halftime Walk in 3D, 4K, and 120 frames per second (24 is the norm, just so ya know). The only problem is that there are less than a handful of theaters in the entire world capable of projecting Gemini Man the way that Lee intended it to be seen. But when it comes to how audiences are going to see the film, it’s nothing more than a crap, claptrap action film full of such uncanny CGI that it belongs in the deepest of valleys. Don’t waste your time.