“There is nothing subtle about you.”

I personally find it to be a good thing that this film’s title is endorsed by and insinuates a divorce from the ceaseless, tiresome Fast and Furious franchise. Those messy movies are family dramas increasingly escalated to an unbelievable realm of science fiction, and Hobbs & Shaw works vastly better because it’s first and foremost an action packed science fiction film with just the right amount of bitter banter and familial squabbles. It’s a massive movie, so big that it’s able to let its head scrape the clouds while its toes just barely touch the ground, making Hobbs & Shaw the rare kind of bonkers Summer blockbuster that ditches the laws of gravity whilst honing its human sides. This one’s clunky, brawny, and smarter than you’d expect. 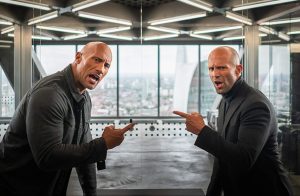 Worlds collide through two very different yet ultimately familiar wrecking balls in Hobbs & Shaw. Luke Hobbs (Dwayne Johnson) clangs and bangs in a LA gym while Deckard Shaw (Jason Statham) resides in London, both begrudgingly forced to squash their differences and work together to track down the deadly virus known as Snowflake, which is capable of creating a small-scale endemic. What’s most interesting though is that Hobbs & Shaw decides to open the film with Hattie Shaw (Vanessa Kirby), Deckard’s sister and a member of MI6 who injects the virus into her hand for safekeeping and is framed for the deaths of her fellow agents by Brixton Lore (Idris Elba), an operative for the myterious Eteon corporation and a guy who is more machine than he is man. Hattie ends up on the run with both leading men, and Brixton is always on their heels.

Hobbs & Shaw has more plot than any movie ever really needs; I’m not so sure it really knew what to do with this many acres on this guesthouse piece of real estate. As such, the film’s final showdown feels more inevitable than it does climatic or exciting, adding more weight to an already over-sized behemoth of a movie while also expanding this spin-off’s own little universe in a unique way. But how the film gets there is more interesting than anything the last few Fast and Furious movies have failed to muster or to conjure. What I prefer about Hobbs & Shaw is that it’s a big film with a smaller crew, and save for a few throwaway cameos by mega movie stars, the entire picture exercises the family first platitudes that the early Fast and Furious films preached but have been too rarely practiced in the latest iterations. This story is more outrageous, more outlandish, yet somehow more humble. 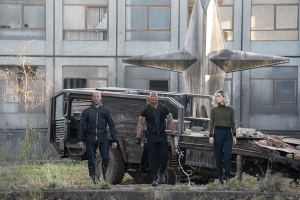 Really though, the star of the film is director David Leitch, a stunt coordinator turned recent filmmaker with a knack for revitalizing the expected and stale action sequences – which, it should be noted, a few here towards the end are edited away to pure nothingness – as well as a trusting ability to let his talented cast explore their characters and inform the scenes rather than vice versa. Hobbs & Shaw has a bad guy who’s as formidable as a Terminator and is more interesting than any antagonist in the most recent Fast and Furious films. The cast has better chemistry, the writing is more clever, and the movie greatly benefits from having a keen sense of self-identity. Hobbs & Shaw shares the high-flying, over the top rope antics and the grand theatrics of the WWE, dishing out a match that’s knowingly staged but infectiously performed. You’ll be entertained.