“Why are you playing hard to wish?”

You have to wonder why Disney has decided to remake all of its animated classics. Do they want to explore new live-action avenues as a means of improving upon beloved stories? Outside of the empowering Cinderella and the technical wizardry of The Jungle Book, the answer to that question has to be an easy no. Remaking any piece of art requires a new angle, a contrasting tone, or something palpably different. Those aren’t present here, and the whole point seems to be about baiting nostalgic moviegoers into paying for a product they’ve already consumed, and one they might literally own at home. Aladdin isn’t the disaster that its trailer painted it to be, but it is ridiculously ostentatious, and it’s the type of big-budget popcorn spectacle you forget hours after having seen it. This diversion is entertaining yet fleeting.

Aladdin (Mena Massoud), the titular “street rat” thief of Agrabah, spends his days with the monkey Abu on his shoulder, stealing only the things he cannot afford and then pawning them for food. He stumbles upon Princess Jasmine (Naomi Scott), venturing out from the castle in disguise so that she can be among her people, and the two share an attraction, albeit one that cannot be acted on. Jasmine is meant to marry loyalty, not a commoner. Aladdin pursues her though, and the sorcerer Jafar (Marwan Kenzari), dead set on overthrowing the Sultan (Navid Negahban), convinces Aladdin to do his bidding for him. Aladdin’s to enter the Cave of Wonders, retrieve the magical lamp, and be given all the riches in the world in order to impress Jasmine. 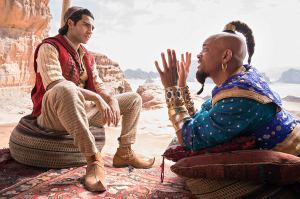 Most of you will already know things don’t go according to plan. Aladdin plays out exactly how the animated original did, except with some massive set pieces as well as a few harmless and forgettable song/dances numbers that are more carnival acts than they are thoughtful story components. Having said all of that though, this otherwise DOA movie is revived with a new pulse once the Genie (Will Smith) explodes onto the screen. Smith brings his trademark charisma, quick humor, a nice lyrical flow, and almost seems to play the iconic role like a version of his famous Hitch character donning a top-knot and an ability to shoot magic from his fingers as he courts the handmaiden Dalia (Nasim Pedrad). The movie’s very interesting in this middle portion, mostly because it’s the only part that dares to be the slightest bit different.

Despite the negative knee-jerk reactions to Smith’s big and buff and blue CGI rendered Genie, the performance works rather well, paying a few worthy and not so subtle nods to the great Robin Williams whilst reinventing the character at the same time. As for Massoud as Aladdin, I’m not surprised he was cast in the lead role. He can hold a tune, dances well, looks the part and has great physicality. But he doesn’t have the charm or what many call the intangible “it” factor, which only drives a greater divide in a so-called romante sorely lacking tangible or believable chemistry. Guy Ritchie’s Aladdin has too much humdrum action and narrative carelessness, especially in the senseless third act, to make it a picture worth remember and revisiting. What disappointed me most was that the film cast the perfect actress as the princess, that Naomi Scott knocked the role out of the park, and that Disney still obstinately took the easiest route possible by simply telling the exact same story of wish-fulfillment. I honestly wonder what they could have done with a movie titled Jasmine. At the very least, it would have had the dignity of being original and the benefit of being progressive. But then again, that’d require studio heads having the courage to hedge bets that aren’t 100% safe.

“Sometimes you just have to see it from a different perspective.”