Originally published in 1634 by Giambattista Basile and revisited by The Brothers Grimm in 1812, the tale of Cinderella is one not as old as time, yet it falls closer to the invention of the printing press than it does the technology and gadgets which brought this well-known story to the screen yet again. It’s a narrative that has more than one hundred screen adaptations, and a story that every person knows. I’ll be honest…I resisted Cinderella. I expected the gaudiness of recent Disney features combined with a rehashed and overcooked fairy tale of which we already know every single ingredient. My attempt failed, miserably. Cinderella, simply put, is an enchanting and beautiful entry into the canon of Disney classics. It’s unusual to see such a purely good-hearted film grace cinemas these days.

This iteration of Cinderella isn’t as much a complete reimagining as it is a reinvention. For as many different versions of the Disney princess’s story as we’ve been told, it’s actually rather straightforward and simple. Girl loses parents, girl goes to ball, girl fits into glass slipper and lives happily ever after. Those are the only major events in the life of Cinderella that audiences have ever seen. What’s most impressive about this film is its ability to bring new ideas and a deeper backstory to characters and a kingdom that up until now had never been fleshed out. We care about this Cinderella, perhaps more than any other movie version, because we’re given a reason to in the first place.

As it opens, a young Ella (Eloise Webb) lives in her own fairy tale. A lavish estate is hers to roam, showing a magical ability to interact with animals because her mother (Hayley Atwell) encourages curiosity and kindness. But like all fairy tales, the warm Spring ending is preceded by the last moments of Fall and a harsh, dispiriting Winter. Ella’s (now Lily James) mother dies, followed by her father, left to live with her new stepmother Lady Tremaine (Cate Blanchett) and her two spoiled rotten daughters. This is almost an origin story of sorts in the vain of recent superhero movies, save for the grim and colorless atmosphere they usually have. We learn how she came to go by Cinderella (in an especially amusing scene), why the shoe was really put on every lady in the Kingdom, and how perfect her world was before she was appointed as chambermaid. 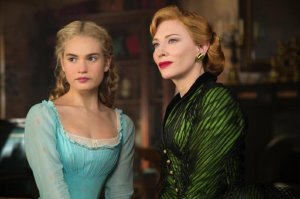 Director Kenneth Branagh, a Shakespeare specialist only recently delving into more traditional films, has such a keen eye for storytelling. He never gets in the way of himself, and you have to believe his previous work in retelling centuries old stories helped him elevate the Cinderella fairy tale to a level we have not seen thus far. It’s not all perfect, like the Grand Duke (Stellan Skarsgård) and the Fairy Godmother (Helena Bonham Carter), two pivotal characters, having little to no screen time. They’re one trick ponies. But Branagh gets the bang for his buck where he needs it in Lily James and Cate Blanchett.

Lily James is a new face for me. I never watched Downton Abbey, mostly because I heard it only goes downhill from the first season, but she is simply extravagant here. Ask me to describe her in one word and I would have to choose exquisite. What a beautiful and wholesome actress for future generations of young girls to look up to as our most beloved fictional princess. Then there is Blanchett – one of our best living actresses – who completely relishes the role of Lady Tremaine. Her character is not as evil as many would suggest. She is beaten, a sad and grieving woman donning a Pan Am smile to guests while expressing contempt and hatred behind closed doors. The two are polar opposites, the perfect protagonist and antagonist combo, because however different they may seem they still have one joint characteristic. And that is the pursuit of happiness through kindness. Lady Tremaine can’t be kind or joyful…she tries, but she doesn’t know how. For Cinderella it’s second nature, and a trait which causes great disdain in the heart of her unforgivingly envious stepmother. 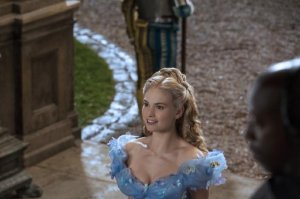 Cinderella, the fairy tale, is rather flawed on a basic story level. It’s presumptuous and depicts the woman as a subservient creature who finds her escape through a coincidental romance. That’s not what Cinderella is about in 2015. This film doesn’t revolve around a pretty lass saved by the handsome Prince as it happened in the 1950 Disney Vault animation. This Cinderella is about a bright, determined, selfless young woman with the awareness to save herself. To find happiness through the discovery of love. Director Kenneth Branagh effortlessly combines the Walt Disney vision with the grounded realities of birth, death, and ultimately renewal. With some of the best costuming (I challenge you to pin down her blue dress to just one adjective) and most meticulously simple yet extravagant set design I have ever seen, Cinderella is more than just a great film with fine performances. It’s the epitome of feel good, heart-warming cinema, bursting with a magically realistic sense of imagination.

“If only you believe in courage, and kindness, and occasionally just a little bit of magic.”