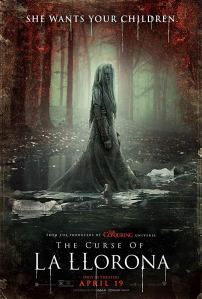 Incoherent, innocuous, and borderline lifeless, The Curse of La Llorona takes a classic folk tale and dooms it to hell with talented, lost actors trying to enliven a soulless script. It’s a bad movie, at times even comically so, and is tied with The Nun for the worst outing thus far in the Conjuring horror universe. It’s such a shame. We can tell the cast tries to make wine from water, and the direction even suggests an inventive eye behind the camera, but that doesn’t excuse the deplorable writing which dooms what should have otherwise been a solid, thoughtful horror film featuring a truly haunting and deservedly dreadful figure. It’s too bad honest emotions never really ever have a say here, because this incantation could have had something worth being charmed by.

Jumping from a 1673 tragedy in Mexico to 1973 in Los Angeles, The Curse of La Llorona follows single parent Anna Tate-Garcia (Linda Cardellini), a social worker investigating the death of two boys. Their Mother (Patricia Velásquez) proclaims innocence, dolling the blame onto the titular La Llorona (Marisol Ramirez), a beautiful ghost dressed in white who’s known to hunt kids to replace her childrren she drowned centuries ago. There’s plenty of substance to work with there on both sides of this supernatural spectrum. Anna tries to protect her children with the help of Rafael (Raymond Cruz), in a role so underwritten it should be considered criminal. La Llorona tries to get her searing hands on Anna’s kids Chris (Roman Christou) and Samantha (Jaynee-Lynne Kinchen), even succeeding with a quick branding. But that’s about as deep as the movie decides to go. How scary can a horror film be when the entire concept swims in the baby pool? There’s no fear of being drug into the deep end here, even when characters are literally being dragged. It’s just too safe.

Let me just say that the actors involved are collectively more than capable of shooting par. They have efficient range, decent accuracy, and showcase a dependable short game during the many close-ups. But they, alongside their director Michael Chaves, can only do so much when the material tees off and immediately hooks left into the trees and the gallery. It’s laughably bad from a writing standpoint, especially considering how great the horror genre has been of late, settling for thoughtless actions and clueless reactions in a movie so lacking depth and gravitas that it’s hard to take these fake featherweight punches seriously at all. The film lacks any sense of identity and individuality.

It’s too bad there isn’t more depth to The Curse of La Llorona. There’s history here, and generations of children who’ve been deceptively terrified by parents with the bed time tale of La Llorona. Her story, told through many variations, is one fueled by revenge and regret and restorative vengeance on the living. This issue with this telling is that La Llorona is treated with all the seriousness and the dignity of the Boogeyman hiding out in a closet, under a bed, or sealed up in the attic. It actually reminded me a lot of 2003’s Darkness Falls, a movie with a similar plot revolving around a nefarious, deadly version of the Tooth Fairy, which is not a compliment either. I’d suggest watching the Netflix series The Haunting of Hill House instead if you want similar dramatic angles, stronger characters arcs, as well as a few truly terrifying moments. The wasteful and plodding nature of The Curse of La Llorona doesn’t deliver in any of those areas, squandering away the Conjuring Universe’s best, most animated villain thus far in a plain vanilla horror movie with no surprises and no flavor.