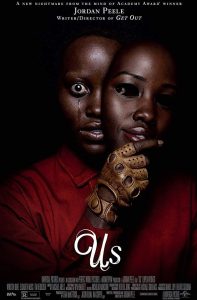 Imagine people huddled around a coffee table book, its binding worn, the tabletop spotted by rings from glasses never placed on coasters. Ideas being spun into intricate and overlapping webs. Us is that book, the conversation piece, the plain-looking page that unfolds bit by bit into a dramatic diorama. Like new kindling on a Summer fire, Us ignites conversation by reloading the pit and fanning the flame without spelling out its entire meaning through smoke signals. One must get close to understand this film. We ought to feel the heat, see the coals, hear the spitting crackle, allow the smell to perfume the fabric of our clothes and our being. In that way Us becomes something we might take to bed out of sheer curiosity, a steady and present nightmare which we’re not only comfortable cuddling beside but waking up with as well, and one we even invite to linger around a bit longer. Us makes you question its reality, is better for saying less, and it’s brave enough to leave many of its massive questions with ambiguous answers. I wish audiences were more receptive to films this bold and brazen.

It’s 1986 and Young Adelaide (Madison Curry) wanders away from her parents on California’s Santa Cruz Boardwalk, returning to them now mute, seemingly traumatized by her experience inside the appropriately named “Vision Quest” fun house’s hall of mirrors. Then we leap to present day. Adelaide (Lupita Nyong’o) travels back to the Summer vacation spot with a family of her own. She’s married to Gabe (Winston Duke), an imposing and affable teddy bear with whom she shares two children. Zora (Shahadi Wright Joseph) is the eldest, typically glued to her cell phone with headphones in. Jason (Evan Alex) has a fascination with fire, wears a mask on his head, is noticeably a little different than others his age. All’s well and good until Alex enters the room saying, “there’s a family in our driveway.” He’s not crying wolf.

Four shadowy figures dressed in red jumpsuits stand at the top of the drive, their hands interlocked, unwavering in their position. We can’t clearly see their faces but the outlines all bear a strikingly familiar resemblance. And then they scatter, surrounding the home and forcing their way in, clutching gold scissors. It’s an incredibly effective sequence full of tension, important details, and humor pulled straight from the gallows. However, the real terror sets in when the Wilson’s are forced to sit across from and look directly at their terrifying intruders. “It’s us,” Alex says, again stating the obvious for those who are otherwise too perplexed to think. Seeing a true doppelgänger of yourself would be scary enough; Us amplifies the shock value by infusing the situation with straight up horror.

Us is the kind of film that handles complex issues in complex ways, imitating the story’s fundamental, The Twilight Zone inspired dichotomy by directly pitting these lead characters against themselves. It makes their cracked mirror reflections peering back at them all the more menacing because they’re instantly recognizable yet so deliriously different, at times to the point of genuine intrigue. Human beings have a tendency to fear that which we do not know. So what happens when the unknown shares our look, our fingerprints, our DNA? More often than not the externalized hate transforms into internalized chaos. Us unabashedly addresses the embattled, accusatory civil war we wrestle around with inside our minds during the home invasion segment of this film, embodying existential crisis as a force to be fought. 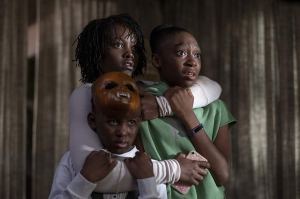 There’s so much more to this satisfying and twisty film, though. Certain moments open up previously closed off neural pathways. False mirrors, most notable in the glass castle owned by the opulent and the oblivious neighbors Kitty (Elisabeth Moss) and Josh Tyler (Tim Heidecker), let us do the looking without being easily preyed upon by outside eyes. Some hidden doors lead to safe spaces, where as others introduce a brand new floor plan altogether. That’s the collective brilliance of Us. Ambiguity in inferior films often serves as a detriment, lessening the emotional impact of a good scare by placing a speed bump just before a big red stop sign. Conversely, Us carefully conceals traps, lays mines, and takes the time to camouflage the ditch it hopes we sprint towards and fall into. Some might say the script has holes when they are in fact intentionally carved caveats, demanding that we paint the canvas with a piece of ourselves.

Masterfully acted by a cast tasked with pulling off daunting and often directly dueling performances, and led by the graceful Lupita Nyong’o in a truly Shakespearean lead role akin to Hamlet told via Science Fiction Theater, writer/director Jordan Peele’s sophomore effort shows no sign of a slump. He’s a resourceful filmmaker, the kind who clearly channels the likes of Spielberg and Hitchcock and Kubrick without losing his own voice or swallowing his tongue. He reuses, re-purposes, recycles when possible. And it’s all encompassed by a story which chooses to highlight how ingrained trauma and socio-economic influence have the ability to silence and to embolden. To repress and to express. Us ends with a stunning shot, hearkening back to its Hands Across America beginnings, looking like the environmental work of art titled “The Gates” installed by Christo and Jean-Claude in New York’s Central Park as it sprawled for miles. I wish I could have walked those sidewalks and seen their art. That I could have found more meaning the longer I walked, and as was likely intended, gone further into my own self. Jordan Peele’s masterful Us might be the closest I get. I’ll take it.