“All art is dangerous.”

One of the very first scenes in Velvet Buzzsaw – a cinematic approach to Juvelian satire with playfully inventive savagery and a generous splash of acerbic wit – establishes the central conflict of the film. The powerful art critic Morf Vandewalt (Jake Gyllenhaal) confronts a piece called “Hoboman” featuring a fully functional robotic panhandler. Morf’s eyes strain from trivial disinterest, telling an exhibitor he finds the work to lack courage, that it’s merely an iteration of other art projects. As Morf casts judgement, the art speaks back and says, “I can’t save you.” Too late, Morf’s already moved on. In mere minutes, the picture literally shows us that this will be a bout between those who exploit art for monetary rewards and the emotive, abstract power at the core of the work itself. Velvet Buzzsaw proposes that these two cannot co-exist, that maybe they shouldn’t. And so a fight to the death it shall be.

Velvet Buzzsaw thrives on the highfalutin pretensions of the contemporary art collective, almost to the point that it’d have felt pompous as a straight-up drama, potentially even bordering on the unwatchable. But the film’s central figures are more caricatures than they are character studies, great exaggerations of the connoisseurs who consume art without allowing the substance to truly digest. There’s the aforementioned Morf, whose blatant subjectivity can make or break an artist’s career. Rhodora Haze (Renee Russo), a punk rocker in her early days, owns a prominent gallery and is now a conniving businesswoman. Her second-in-command is Josephina (Zawe Ashton), whose own drive for success is no dissimilar from a shark circling its prey. Rhodora’s former curator turned art adviser Gretchen (Toni Collette) has money on the mind, narcissistic art installer Bryson (Billy Magnussen) has his own creative ambitions, and competing gallery owner Jon Dondon (Tom Sturridge) is no stranger to bending the rules in his favor. They’re all surrounded by art yet never really care about the process either. Sadly this representation is quite accurate.

A discovery sets the film in motion and the art world – eventually and quite literally – aflame. Josephina stumbles upon her neighbor Virgil Dease dead in the hallway, later told that the hermetic old man requested his vast portfolio of paintings be destroyed. Josephina has other plans for the work though. Virgil’s artwork takes the world by storm, winning the praise of Morf (whose grandiloquent prose says the work ensorcelled him), lining the walls of Rhodora’s gallery, bid on by Gretchen for her private client, enviously pursued by the tasteless Jon Dondon. The problem is that none of these people really appreciate the art. Throughout Velvet Buzzsaw, we meet two artists who get lost in Dease’s work: Damrish (Daveed Diggs) is an up-and-coming graffiti artist and Piers (John Malkovich) is a renowned abstract artist whose creative dry spell is devilishly tied to his newfound sobriety. They stare at a painting together, Damrish dumbfounded, Piers driven to grab and to down an entire neat drink. Art can be appreciated by all, but the story concludes that artists are able to do so more easily and readily than others. 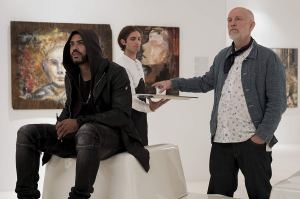 As the story dives deeper into its largely unexplained supernatural elements, inducing madness and hysteria without leaning completely into the gores of horror, Velvet Buzzsaw takes on a more mysterious and ominous tone. Ambiguity serves the film well and gives life to the air floating around in its stuffy atmosphere, permitting a deadly presence to fill entire rooms and to loiter overhead; we know it’s there, whatever it may be. And while the top-notch script is littered with clues and bait (Rhodora’s intentionally shown tattoos chief among them), the picture’s success comes down to the calculated, often serrated performances of the cast, all of which are honed by writer/director Dan Gilroy. Movies like Velvet Buzzsaw shouldn’t work. It’s a bizarre, outlandish, self-serious satire fueled by the seven deadly sins, and its success is a testament to how the performers bring life to the carefully boxed lines Gilroy reinforces.

Velvet Buzzsaw won’t be to everyone’s liking or to everyone’s taste. Why should it though? That’s the beauty of art; its inherent subjectivity defies definitive objectivity. Whether or not you enjoy the film, it’s important to ponder the possible meaning, to incite debate, to truthfully reveal how it made you feel inside. Here, the commodification of art comes at a grave cost, cheapening the work scattered throughout exhibits and cheapening the souls of the artsy-fartsy trendsetters navigating the halls like piratical pioneers. Velvet Buzzsaw gives art and the artist agency to decimate those who exploit the work for monetary gain and personal prestige, suggesting that if you’re willing to profit off of another’s artistic endeavors, you better be willing to pay a premium price. I found this one fascinating.

“It creates this unique sensation.”