Guilty of sensory assault in the first degree, the polarizing Vox Lux is sure to divide audiences, leaving some running to the cops to report a crime and others dumbfounded by the masochistic pleasure the picture delivers in sharp spades. I reside in the latter camp, as I was left reveling in the intricate, thoughtful pain that the film carefully yet brashly dumps onto the viewer. Vox Lux critiques pop culture with a scathing and scintillating tongue, depicts the uneven give and take of celebrity status, and presents performance art as both a savior and a demon. It’s one of the boldest, most fascinating and fully realized visions I’ve seen in 2018’s already impressive catalog of cinema.

Old camcorder footage of Celeste (Raffey Cassidy) introduces us to a young girl before she experiences unthinkable tragedy upon her return from Christmas break, her life story abridged and gleaned over by a Narrator (Willem Dafoe, who’s unmistakable voice serves as the omnipotent presence throughout). It’s so dispiriting to know that it’d likely only take most people three attempts to correctly guess what she endures. Celeste survives the ordeal, and after a clip of her singing to the heavens in great mourning goes viral, her celebrity explodes. Vox Lux condones and then condemns the actions of the masses at this point, showing us how people need someone or something good to rally around, and how the industry’s avarice devours and exploits the pool of talent until it’s nearly depleted. The first half is harrowing and heartbreaking without pretending to be holistic either.

A crucial scene shows Celeste conversing with her manager (Jude Law), a man who looks dead by day and alive by night, voicing her concerns about producing empty pop music. She obliges and years later we meet the hostile byproduct of her decision. Now a superstar on the world stage, Celeste’s (Natalie Portman) appearance is that of a space opera enchantress, small in stature yet incredibly tenacious, a bewitching and far different adult than we might have expected. Celeste has a teen daughter (again played by Cassidy in a brilliant decision, symbolizing literal rebirth) who she can’t really parent, and she’s in a tailspin of drugs and alcohol abuse. Vox Lux punches us in the gut to start before letting its hands slither upwards, wringing around our necks. Celeste wears a choker in that region to cover an old scar, to illustrate where she is internally, and to separate the head from the heart. Even someone who sings for a living can feel silenced.

Uneven and sporadic in an almost constructed manner, Vox Lux unfolds with equal amounts of patience and immediacy, pushing the envelope and subscribing to all sorts of virtues and messages along the way. The movie doesn’t allow itself to be defined as one thing either, nor does it ever want to be a singular excursion, instead trekking and tracking between genres with violent footsteps and stripped down, vulnerable conversations. So many movies try to do what this one does, few of which meet or even exceed it in terms of quality. Most are like buffets providing long lines of cheap filler, whereas Vox Lux offers its diners a cornucopia of artisanal sustenance. There’s so much behind this brilliant film, so many rich topics of discussion and so many places to sit down to discuss them, that I can imagine it being a new entity and a new experience with each viewing. Vox Lux somehow manages to be utterly alive and partially dead inside in the span of one long breath. 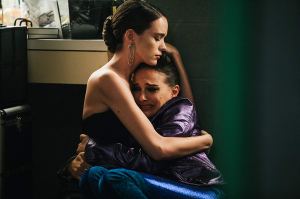 Vox Lux does absolutely anything and everything to capture our attention, creating art from tragedy and presenting the simplicity of pop music as an automatic car fueled by grief which each and every one of us are able to drive. And through the visionary mind of writer/director Brady Corbet, with all of the jaw-dropping long takes and the confrontational sit downs, the picture builds to what should be a breaking point, only to stiffen up and stand up straight before heading back in for more. With a title that translates to “Voice of Light” and a protagonist’s name that means “heavenly,” Vox Lux reckons with religion and the cosmos by way of pop songs with a punk attitude, selling its soul in order to make sure we’re entertained by a story whose essence is a mix of Sia’s original music and the progressive, volatile style of The Mars Volta. The credits roll as the movie opens, play in reverse as the film ends, and Vox Lux exists somewhere in between these two scrolls, screaming into the static of a life likened to purgatory. We’ll be talking about this one for years to come, searching for the light at the end of its tunnel.

“All that matters is that you have an angle.”