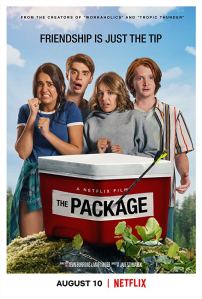 “Why does this feel so awkward?”

Incredibly stupid and surprisingly smart, The Package refuses to simply mail itself in without adding a memorable signature. No, this movie pushes the envelope and goes to every foreseeable extreme in regards to nearly every extremity of the human anatomy, and the story finds its footing when it’s unleashed out into the wild. What starts as a poor man’s Superbad becomes something like 2008’s criminally underrated Sex-Drive, trading out the forced vulgarity for a more natural sex comedy that actually hits the right spot. The Package uses its hyperbole to decent enough effect, creating a film that feels appropriately unexpected and just a little bit believable. I shook my head because it can be so dumb, and I shed genuine tears because it can be so damn funny. In this case the laughs overwhelm the lunacy. 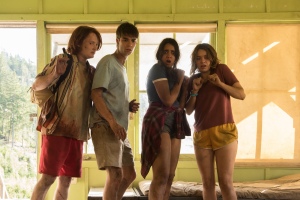 What was meant to be a bro’s trip into the woods becomes a trek full of lust and temptation and dismemberment. Sean (Daniel Doheny) is home from studying abroad in Germany. He’s supposed to head out camping with Donnie (Luke Spencer Roberts) and Jeremy (Eduardo Franco), sleeping in tents and using Jeremy’s fake military ID to buy some beer and some rum. Then Jeremy’s sister Becky (Geraldine Viswanathan), an old crush of Sean’s and her friend Sarah (Sadie Calvano), a prior fling with Donnie, tag along after Becky’s untimely breakup. Nothing good is bound to come from a few horny teenagers hiking miles into the middle of nowhere with coolers full of alcohol, especially when Jeremy is trying to master the art of the switchblade.

Jeremy breaks the seal, goes to take a leak, is startled by his friends and cuts his penis clean off. Yes, you read that right. The Package is, well, about a severed male package. He’s air-lifted to the hospital, and because the movie involves intoxicated teens, every possible mistake is made along the way. Classic spy films use countdown clocks on bombs so we know when the time is up. Here, the clock is a flower that’s been put in an empty cup, slowly wilting and losing its leaves. There’s only so much time for his friends to come through in the clutch and deliver his penis to him before he’s left with a sown-up nub. Like I said, The Package goes as gross and as far as it possibly can, and at times it can be a little too much, but underneath it all is a movie about camaraderie and all of the crazy crap we’re willing to do for the people we call our friends.

From the same guy who gave us Mike and Dave Need Weddings Dates, another movie with a formulaic plot but inventive banter, director Jake Szymanski elevates The Package by using equal levels of maturity and naiveté. It’s a well-sourced film, referencing Pulp Fiction, City Slickers, Cliffhanger, and T2: Judgement Day in gut-busting ways, and the movie makes great use of its characters even when the plot goes thin or sideways. Michael Eklund brings huge laughs as a militaristic gas station attendant. As Sean, Doheny basically plays a role that Justin Long built his early career on. Spencer Roberts makes Donnie a nice jerk and Calvano gives Sarah a hard exterior. But what makes the movie are the performances from Franco and Viswanathan. Franco endears Jeremy with a level of optimism and hope that proves to be nearly fatal. His desperation, from a possible catfish relationship to wanting to feel a kind of Escape to Witch Mountain psychic, sexual connection with his twin is creepy and somehow lovable. And for anyone who saw Blockers earlier this year, it should come as no surprise that Geraldine Viswanathan is a comic dynamo, playing the love interest in ways few films allow. Some would say she’s tom-boyish. But in reality, she’s just comfortable in her own skin, wearing converse and a plaid shirt wrapped around her waist, and she makes the movie feel authentic at its most absurd because she’s so very talented at turning the crazy antics into something we can imagine happening. The Package is short on plot and heavy on laughs, and in the end it gets where it needs to go.