Technically speaking, I saw Mile 22. The teen working concessions swiped my card, gave me a ticket, and I sat in the theater for about two hours. But I’m not quite sure what I watched, and if pressed against a countdown clock, I don’t think I could actually tell you what the hell this disaster is even about. Mile 22 marks a low-point for both Mark Wahlberg and the entirety of the 2018 Summer release schedule as a whole, and it’s a deeply nihilistic and utterly incompetent attempt at jump-starting a potential action franchise. Mile 22 is so bad, so dull, and so slapdash that it jumps the gun, disqualifying itself before the race has even begun. The last place ribbon is earned and deserving.

Thanks to the internet and the help of Wikipedia, I was able to read a plot that never became intelligible on-screen. I’m not kidding at all…before and during and after, I had absolutely no idea what was happening in Mile 22. Apparently it’s about a Black Ops team. They’re led by James Silva (Mark Wahlberg) and they’re on the search for Russian operatives. A guy named Li Noor (Iko Uwais) shows up promising information if he’s kept safe. The title references the trek the team must make to obtain Noor’s secrets. There are bombs and bullets and fistfights, and then the movie takes a sharp left turn, careening into a roadside crash barrier of an ending. Not even the airbags could save this high-speed, low-stakes vehicle from total destruction. 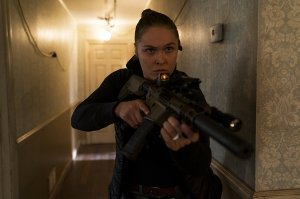 As the leading man in Mile 22, Wahlberg’s character is supposed to be hyper intelligent. Think of him as a bad mix between The Accountant’s shallow dive into the Autism spectrum and Jason Bourne’s overwhelming, often inventive physicality. As James Silva, Wahlberg combines both through robotic mannerisms with expressed anger and social ambivalence, creating a character who’s as reckless as he is feckless, and is always wholeheartedly unlikable during one of his many condescending speeches throughout. It is, in my opinion, the worst and most misguided performance of Wahlberg’s career. Silva never once exudes a single heroic quality. Zero compassion, no shame, not an ounce of empathy. He is the antithesis of what action figures can become or should aspire to be. He’s a trigger happy false prophet who doesn’t shy away from encouraging his partners in crime to take the lead or to become martyrs for the greater good as long as he gets to stand back and assess the situation. Why should we root for a fast-talking coward?

Mile 22 makes no sense, it’s irredeemable in its rationality, and is one of the most over-edited/muddled action films I have ever seen. It’s like live-action, fast-paced anime that’s been shot with a big budget. Movies like this one that cut every single second are ones which lack vision, and when you lack vision, the whole thing comes out as a pile of puke pulled from fingers forced down the throat. The legendary Iko Uwais does fine work in the scenes he’s given, but besides that, Mile 22 is as woebegone as director Peter Berg’s equally aimless Patriots Day. He’s become a wannabe Michael Bay creating jingoistic, lifeless action features, and with this one he’s hit his unsalvageable nadir. A vegetative script, compensatory macho directing, and the epileptic editing make Berg’s swirling calamity more of a Category 5 hurricane than it ever is a motion picture.