Even with its surprising narrative twists and turns and shocking revelations, there are few false truths orchestrated throughout Tully, only a reality where blemishes and pain and anxiety are allowed to exhale a deep, bellowing breath of relaxation. The film doesn’t accentuate the curves of its real-life portrait with eyeliner or a contour kit, doesn’t use concealer to hide those stupid blotchy spots, and refuses to tuck its weight inside a slim-fitting pair of SPANX. Tully wants us to see its body without scrutiny, so as it picks and peels away at the scab located on its wounded heart for nearly 2 hours, and by the time the film finishes – alongside the people we’ve met on this fictitious venture – we are left scarred. Few movies in 2018 have been quite as introspective, disastrously quotidian, or as brashly unconventional as the tantalizing Tully. 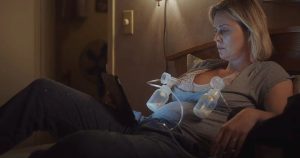 It’s apparent early on that Marlo (Charlize Theron) is a woman on the verge of a nervous breakdown. She’s married to Drew (Ron Livingston), a man who’s hardly home and a Dad who gets to play the part at his own convenience. Eat dinner, help out with homework, play video games until he falls asleep. Drew is not a bad man; he’s just remarkably safe and boring and disinterested. As is Marlo, although the difference between their lives is staggering. She never gets to stop being Mom, and with another surprise ballooning inside her belly, the trauma of Motherhood takes a literal toll on her body and on her mind. When their son Jonah (Asher Miles Fallica) – constantly and condescendingly labeled as “quirky” – spills his drink at the table and soaks Mom’s shirt, Marlo gives up and sheds down to her bra. Their eldest Sarah (Lia Frankland) remarks, “Mom, what’s wrong with your body?” Tully defines the maternal role as a zone that’s never judgement free.

A dinner date introduces the massive shift in the lives of the everyday folks who never struggle to survive but refuse to allow themselves to thrive. The family visits Marlo’s wealthy brother Craig (Mark Duplass). The kids eat with a hippie nanny and are served oddities like rambutan instead of their coveted chicken nuggets. Meanwhile the parents get to enjoy time alone. As is present at most familial gatherings, there’s tension around this table of adults, mostly derived from a human-to-human disconnect. It all feels forced instead of authentic on purpose. Afterwards Craig shows Marlo his new tiki bar, reminds her how they both came from the same shitty upbringing, and offers up a seismic gift; all expenses paid for a highly recommended night nanny. She quietly enters the home and watches the newborn, only wakes you for feeding, coming and going like a saintly figure magically materializing at the doorstep and disappearing into the night. Fights and school issues and unrelenting kicks to the back of her chair in the car force Marlo to accept a helping hand.

In walks Tully (Mackenzie Davis), a light in the literal darkness. Marlo doesn’t know what to make of this woman. She looks too young, too beautiful, too eerily familiar. Yet they bond over their similarities, with Tully’s probing and prying youth breaking down the walls of Marlo’s hardened heart. In Tully, and specifically through the character of Tully, the story takes on a narrative about how to properly calculate the value of self, and it does so by digging into all of the many ways we depreciate our own currency and worth in this world. Why do you feel depressed? What is missing from your life? How can we fix this? Tully hides a therapy session both in plain sight and beneath the occasional jokes and quiet revelations, and by taking this approach, we open like a flower springing into bloom. We’re the tulips and the questions are the rain, allowing us to blossom when we’re ready and full. It’s so delicate and humane and beautiful.

The third collaboration between screenwriter Diablo Cody and director Jason Reitman, Tully expresses a deep understanding of the human psyche. Its flaws, the glitches, and the painful stitches sown along the way. Elevated by two powerful, transformative performances from Davis and Theron (both deserving of some Awards by end of year), Tully starts out with confusion and becomes clearer as Marlo’s mind lifts from the fog of fear and the density of depression. It evolves into a film that tackles parenting through the lens of a prior self and it dares to ask if, as we shed parts and evolve and micromanage our own DNA, whether or not we’re still the still the same person or another entity altogether. And by that account, Tully is a search for soul. Consider it found.

“You can’t fix the part without treating the whole.”