“You’re the one who remembers things.”

Unknowingly retailing itself as a cheap alternative and derivative take on the classic noir genre, Gemini has all of the right looks and hardly any of the right reasoning. Its half-hearted cynicism is belittled by well-endowed visions of hope, it’s fatalism becomes devalued by the doltish 3rd act twist, and its moral compass doesn’t do enough spinning to make us dizzy. Gemini wants to fit in with its contemporaries – do yourself a favor and see 2005’s anxious Brick or 2016’s seductive Always Shine instead, as this film poorly incorporates elements from both – and ultimately reveals itself to be more of a poser than a proper player. 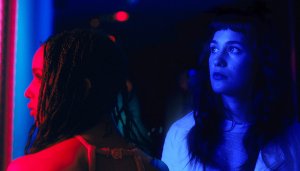 Colored by carefully calibrated neon lights and pallid West Coast mornings, Gemini sets up a friendship that can be as hypnotizing as it is feeble. Heather Anderson (Zoe Kravitz) plays the prissy movie star, sabotaging an entire film because she doesn’t want to endure re-shoots and is constantly afraid of her own fame. Paparazzi, stalkers, fan-boys and fan-girls. She’s inundated by an adulation she creates and craves and somehow loathes. Her fixer is Jill LeBeau (Lola Kirke), a personal assistant who’s grown into a friendly confidant. Jill caters to Heather and Heather looks out for Jill. When Heather asks her “partner in crime” to borrow a gun, the designation is meant to be figurative but soon turns literal when Heather apparently dies. Jill is suspect number one. This is the meat of the film and it’s cooked to death. 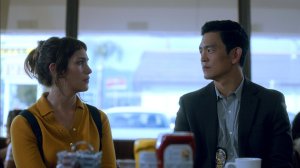 Where Gemini stalls out in the scope and the overall build of this story comes from the fact that we know Jill isn’t guilty. We see her alibi. We witness her reaction to a lifeless body. She’s just scared and naive and unwilling to cooperate with Detective Edward Ahn (John Cho). These aren’t spoilers per say, if only because spoilers require a picture worth digging into its unpredictability and factored unknown. Gemini isn’t a terrible film; it’s easily consumable fodder. That it’s so transparently bland almost makes things worse, mostly because I can’t help but wonder what this film could have been had it refused to give its audience the answer sheet before taking the test. Aaron Katz directs/writes this film on an uphill curve, and his unwillingness to tease the temptation of Hollywood’s ugly failure leads to a beautiful, meaningless mess of a movie.

Most solid noir films (or those worth their fair share of a grain of salt) are about unraveling a mystery, tying a narrative knot with a few loose ends still dangling about, and revealing a deeper (and normally darker) side of a humanity. Gemini attempts all of these tropes, so it should be no surprise that it’s clearly deficient in every single category, as the picture and the script invalidate themselves by offering a mystery with no compelling tangents and no traps for us to be baited by. In Gemini, A + B = C, and in better, more memorable movies, there’s a whole lot more to the equation. This one doesn’t add up to much at all. Like Heather’s fame, Gemini proves itself to be casually fleeting, and if that’s the so-called point, I have to wonder why a movie went to such great lengths to dispense such an already accessible truth.