Within the first 10 minutes of Bright – a lazy buddy cop movie set in an alternate reality of the most fantastical extremes, masquerading around with great ideals of social relevancy – Daryl Ward (Will Smith) lectures his daughter on race relations immediately after murdering a fairy in his front yard. This ignorant transition, in many ways, tells us everything that we need to know about this piece of hot Netflix garbage being streamed into the homes of people everywhere, which is that Bright always feels like more of a misconceived concept than it does an actual film. How this dreadful script ever got a green light is beyond comprehension, and when you consider the squandered $90 million budget it cost to jolt this stillborn monster to life, it’s enough to fill you with legitimate anger. 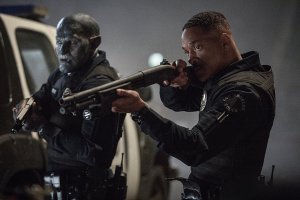 LAPD officer Daryl Ward doesn’t want to be partners with Nick Jakoby (Joel Edgerton), the first Orc to ever be a blue blood. But nobody wants to ride shotgun with Ward either, and since he only has 5 years to put in before receiving his pension, he figures that he might as well give it a try. Ward’s nearly killed by another Orc in the line of duty, Nick swears it wasn’t a setup, they bicker and push each other’s buttons. For how stunningly stupid and ridiculous Bright is for nearly every second of its miscalculated existence, there’s decent chemistry between Smith and Edgerton when they’re allowed to sit down, act, talk, and to reflect on their place in this convoluted and rather careless story. I could have even convinced myself to care for these personalities, but Bright is so obsessed with creating a vast fantasy landscape that the pieces inside its imagination feel as fully realized as a town of SIMS characters.

In Bright, the grievances of America’s greatest sins have been given the kind of fairy tale treatment you’d expect to sputter out from the fingertips of an over-confident RedBull drinking fanboy at 3 in the morning. And that’s because Max Landis – who, I must say yet again, is one of the industry’s most polarizing and deficient writers backed by the powers of nepotism – has the ability to generate genuinely intriguing ideas without the focus to make them balanced or multidimensional. The film turns into the pursuit of a magical wand, the safe-keeping of a femme fatale played by Lucy Fry that’s eerily similar to Bad Boys, and ends with the sickening promise of a sequel. With Bright, I’m beginning to think that David Ayer is a talented filmmaker who otherwise refuses to go outside his own comfort zone of bullets and badassery. What a shame. 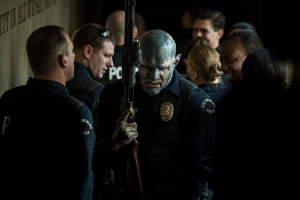 Bright is a foolish film, one that thinks new character mock-ups are enough to distinguish its heavy-handed reliance on old clichés, and it’s a picture that’s offensively oblivious with its racially charged dynamics. In this movie, Orcs are systemically derided and marginalized, and Bright clearly makes them the bald-headed stand-ins for American minorities. This could work in a better, more nuanced and thoughtful picture, but in Bright all of the Orcs are gangbanging thugs who dress in chinos and hate the police. It’s so careless that it ought to be charged with neglect. This film, so clearly meant to refute racism, actually drives around looking in its blind spots. Contrary to its title, Bright is thoroughly blind and dark, and I don’t think it could’ve misconstrued American social dynamics echoing across the nation any more inaccurately than this heedless, senseless, illogical piece of long-winded pitter patter does for two unforgivable hours.