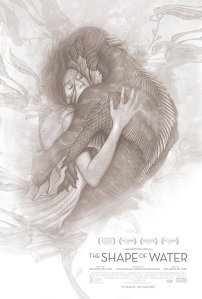 “If I told you about her, what would I say? I wonder.”

Watching a Guillermo del Toro film can be an exhaustive, drowning, practically purgative process. It’s easy to feel as though you’ve been left on the outskirts of understanding, hung out to dry, trying to inhale and consume a gigantically genius story that exists inside its creator’s own expressive and hyperactive frontal lobe. With The Shape of Water we’ve been invited to imbibe in all things del Toro: his outstretched hand (its peaceful palm upturned for a soft touch), his glowing smile, those cherub cheeks and wide eyes lit by the memories of a childish vigor. The Shape of Water is at once careful dramaturgy, calculated comedy, seamlessly interlaced twines of arabesque art, and moviemaking of the absolute highest order. Del Toro has made a fairy tale for adults that’s an inspired film all his own, as well as one of the most daring moviegoing experiences 2017 has had to offer. “That was unbelievable,” one audience member said as she exited. And to think it required no sleight of hand trickery. That, my friends, is the magic of the movies. 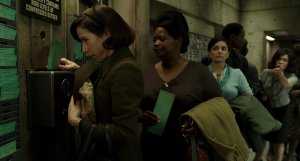 For Elisa (Sally Hawkins), life is a routine silently slaved against the ticks of the third shift clock. She’s a mute woman and an all-ears master of the custodial arts at the Occam Areospace Research Center, mopping up the piss of the higher-up’s urinals. Her only work friend is Zelda (Octavia Spencer), an African-American woman who serves as Elisa’s interpreter, confidant, and the fast-talker who does enough wise cracking for the both of them. Since this is 1962 Baltimore (although, for what it’s worth, the lavish colors and Alexandre Desplat’s intensely beautiful score could convince you that this was the 8th arrondissement of Paris) Occam represents the restrictions of this American life. Only men – even if they’re as dim-witted as David Hewlett’s Fleming – are in positions of power, women tend to the chores, Zelda is still referred to as “the help.” For a film with the narrative structure of a grim fairy tale, The Shape of Water feels tangibly real. Then again, that resides in Guillermo del Toro’s wheelhouse. 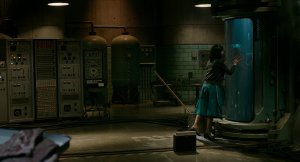 What’s truly remarkable about this film is that, solely on a storytelling level, its genius is brought to life by the three-dimensional characters. Giles (Richard Jenkins), a starving artist if ever there was one, represents the cultural aversion to homosexuality and a precursor to the 80’s AIDS epidemic. Dr. Robert Hoffstetler (Michael Stuhlbarg) adds in a Soviet Red Scare angle that’s bolstered by the great space race. After these carefully crafted introductions we meet Strickland (Michael Shannon), a towering terror of a man who carries a cattle prod, chomps on hard candies, and is the poster boy of a society on the brink of great change. Strickland is a cold man – we assume his childhood clay was shaped by lashes and brandished belts, left to harden and bake in a blistering sun – whose attitude towards women and children and foreigners not only says volumes about the silent divide of social and economic classes, but about the man himself, too. So it’s no wonder that he strides into Occam with an Amphibian man (Doug Jones) he wrestled from the Amazon, dead-set on dissecting the “thing” to learn more, to boost American engineering, and to earn his stripes. Why is it that we always want to destroy that which we don’t know? 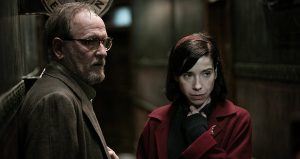 After this year’s live-action remake of Beauty and the Beast – a sordid and soiled film that belongs in the waste bin – The Shape of Water is more akin to Jean Cocteau’s La belle et la bête interbred with Swamp Thing. There’s one key difference though: Elisa has the free capacity to choose her own path. I can only assume that many people will reply to this movie’s description with a scoff. A woman falls in love with a fish-man? To say that is to oversimplify a story about outsider individuals who feel as if they are incomplete. The Shape of Water isn’t a film directly about the power of adoration or even love; the movie flirts with those elements, but more than anything else, this greatly exaggerated story is a study about the limits of love, and to whom we offer our time and energy. The happiest people in this film are the ones who can look at themselves in the mirror without disgust, and that’s by no mistake. 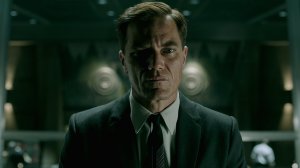 As a moviegoing experience, The Shape of Water is one of the year’s best. My crowd laughed, cackled, shrieked, and even yelled at the screen. This is nothing less than visceral. But when you scrutinize its meaning and inspect the craft, that sense of easy enjoyment forces us to molt and elevates the picture into the echelon of art. The production design gives the exquisite sets a slightly disproportionate look, and cinematographer Dan Lautsen lights them to be murky, teal-tinted, underwater canvases risen from the Ocean. Every performance is superb, especially Hawkins’ bubbly approach to Elisa and Shannon’s stifling grip on Strickland’s heart, giving this entire cast the impressionistic depth of Seurat’s famous painting A Sunday Afternoon on the Island of La Grande Jette, only with the expressive faces and visible distress of George Tooker’s more social realism and photorealistic works. As you can probably tell, del Toro is a librarian pulling from the shelves of time, his downright giddy and effusive love for all of the arts spilling from his lips as he turns each page, aware of what’s to come while just as excited to introduce us preschoolers in the audience to the joys of his inspiration. The Shape of Water is like the rare teacher who disguises their teaching with an entertainment value that’s second to none.

While Pan’s Labyrinth might still be my favorite picture of his, there’s no doubt that The Shape of Water is definitely the most Guillermo del Toro film. I mean, just consider some of the overarching themes in play. There’s reference to the eternally punished Greek figure Tantalus from Giles as a spokesperson for the lesser. There’s hypocritical preaching about the candor of Samson’s strength and trials by Strickland. This religious/mythological dynamic isn’t meant to prove one side as correct, but is a challenge to the small-minded that there’s more to the world than their insignificant little selves. So from the very first shot, as Elisa dreams away on her sofa (a chesterfield, a cabriole, or maybe a camelback?), floating weightlessly in her apartment, the significance of the title begins to take form. And come the echoed and altered tune of the last shot, we understand that the title is less concerned with the material substance of water itself, but more with how we as people often flounder, fall, serenade, despise, and ultimately have power over our surroundings. That we have the agency to create change. The Shape of Water weighs on you, enlightens you, and speaks volumes. I suggest that you slowly guzzle it by the gallon, never forgetting to taste and to savor ever single drop.

“When he looks at me, he does not know how I am incomplete. He sees me…as I am.”