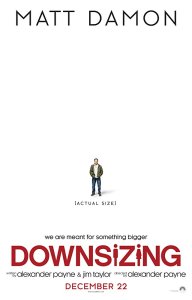 “What won’t they think of next?”

For roughly 45 minutes or so – approximately 1/3 of the film’s increasingly tiresome duration – Downsizing is all aces. It’s intelligent, witty, and the art design suspends our sense of spatial reasoning, convincing us that a low-key looking movie actually belongs to the high-brow science fiction genre. However, what introduces itself with the off-beat originality of The Beatles’ “Sgt. Pepper’s Lonely Hearts Club Band” flips the vinyl over and plays out for the remainder with all of the commercialized nonsense likened to that of “Yellow Submarine.” Downsizing thoroughly mismanages its otherwise intriguing concept, settling for cheap romance & cataclysmic drama instead of digging into its challenging confrontations, as well as by abandoning the most Orwellian parts of its beguiling build. I’m not mad that it’s such a forgettable film. Just thoroughly disappointed is all.

Downsizing’s peculiar premise is the bait, and I imagine it will be hard for most to not bite (even if the movie excites itself to the point that it forgets to reel in the line). In this story – maybe a bit in the future, or maybe just around the corner – overpopulation is deemed the biggest threat against humanity. So leave it to a team Norwegian of scientists to come up with the most drastic possible solution: shrink humans down to 5 inches tall. The titular process causes a worldwide frenzy, leading people to “downsize” for all sorts of reasons. For change, to save the planet, for the economic incentives (dwindling real world bank accounts skyrocket into the millions). This entices Paul Safranek (Matt Damon), an occupational therapist working for Omaha Steaks. Perhaps getting small will finally allow him to feel big. His wife Audrey (Kristen Wiig) agrees to the irreversible procedure, but because Wiig has become a stronger actress as of late, we see the trepidation in her wary, wandering eyes. If you’ve seen the trailer, it should be of no surprise that they part ways. Downsizing does this so that it can be a journey of self-discovery. It’s just a very misguided one.

Paul’s life in Leisureland – the premium community for the small – doesn’t turn out to be the idyllic vacation he signed up for. A noisy neighbor (Christoph Waltz) provides laughs without adding weight to the plot. A national catastrophe ensures the ultimate demise of the human race. And all the while, Paul begins to fall for Ngoc Lan Tran (Hong Chau), a Vietnamese dissident shrunken without her consent for protesting the government. She now cleans the castles of the upper-class to survive. Even in a place named Leisureland, some people have to work. The biggest problem with Downsizing (and there are a lot), is that it begins as a reasonably successful attempt at surrealistic satire and tries to morph into a cheesy romantic drama. Writer/director Alexander Payne had a vision for this film, but I don’t believe he ever saw it clearly. Like his characters, Payne shrinks the world down to the size of a finger in hopes of consuming more, even though it doesn’t have the stomach to carry all of the gluttonous excess. 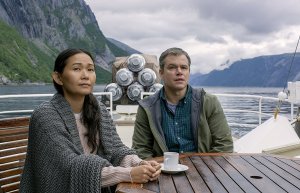 Humanitarian crises. Issues of representation. Mankind’s relationship with the world. The ebb and flow of economic change. A destiny driven theme packed full of nails-on-chalkboard inner questioning. Alexander Payne, channeling his inner Hal Ashby disposition and Albert Brooks’ Defending Your Life, shuffles this mismatched deck of cards too many times and attacks his own story from far too many angles, and almost every storyline seriously suffers because it’s being seen from a bird’s-eye view instead of face to face. There are two lone redeeming qualities to this designer dreck: the production value really is intricate and awards worthy, and so is Hong Chau as a spurned woman who acts not out of fear but on compassion. Chau embodies her confusing character while Damon, a bit miscast here, doesn’t have the wide-eyed joy to make Paul the everyman he’s supposed to be. And still, the strangest thing about a movie called Downsizing – and perhaps the most ironic – is that it tries so damn hard to be so damn big.

“It has its pluses and minuses.”