“This is great news.”

Some people lie without batting an eye, because, well, they’re compulsive liars. Others do so as a means of protecting a person they care about, refusing to say that a new hair style actually looks horrendous, that a crappy home cooked dish tastes delicious, that they definitely seem to have lost weight despite what their waistline might say. It’s more of a fib deployed as protection from a harsh truth. And then there are the people who seem to lie out of sheer boredom. They’re enticed by the possibility of being caught, but I suspect that they are even more fascinated by the energy and the imagination required to forge the truth. The Lovers falls into that last category, and although the ending doesn’t stick the landing, the unique twists and flips put into its aerial act become a thing of beauty all its own.

What is there to do when you fall out of love? I can only assume the logical answer is to look elsewhere, even if you aren’t quite ready to completely severe ties altogether. The Lovers revolves around Mary (Debra Winger) and Michael (Tracy Letts), husband and wife of many years, parents to an only child. Michael still races to work insisting that he’s late. We see his dispensability in the office and how he never actually does any work there, despite his claims of perilous exhaustion when trudging through the front door. It might as well be an afternoon spent playing chess in the park. Mary does likewise, coasting through meetings with a wandering mind. She’s more focused than her husband but no less filled with discontent. They both have secrets, lovers on the side, and couple their separate lives as closely as two people this dissociated with each other possibly could. Rekindling this flame is as likely as a phoenix literally rising from the ashes.

One fateful morning, backs typically turned to each other roll inward onto the opposite side. They kiss. Eyes open in shock and they rush apart. We as viewers immediately clue into the gravity of their long-fueled disconnect. As the flame is sporadically stoked out of the blue, Michael must deal with the wrath of his French fling Lucy (Melora Walters). Mary has to reassure Robert (Aidan Gillen) that he’s still the one for her. Both of these “Lovers” have promised to call their marriage off after a visit and a talk with their son Joel (Tyler Ross) and his girlfriend Erin (Jessica Sula). The Lovers stays true to the nature of how second thoughts are so often born from second tries, and the film absolutely shines when Letts and Winger are able to play off of one another. For about an hour, writer/director Azazel Jacob’s feature was as good as anything else I’ve seen this year. Then we get that ill-conceived ending. 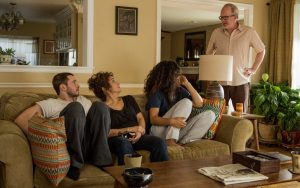 It’s hard to complain about The Lovers. The film makes great use of its limited space, showcases two absolutely awards worthy leading performances, and is so damn brilliantly and playfully scored by Mandy Hoffman that you feel as if you’re watching a fairy tale squarely aimed at adults, almost like a darkly comedic version of the 2015 movie 45 Years. But once the son shows up and small battles turn into all out war, the picture loses its uniquely middle-aged sense of already established identities in crisis, adding petulant insults without injury. The Lovers communicates its message to a refreshing and melodic tune, and then it ends by rebooting a tale of lost love that, I wholeheartedly believe, deserved a more bittersweet and sour sendoff. The Rolling Stones taught us, “You Can’t Always Get What You Want.” I wish this film knew and reconciled with just that.

“I can’t stop thinking about you.”