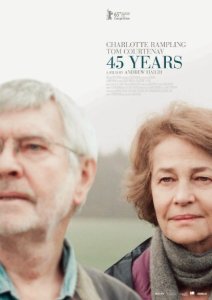 “I can hardly be cross about something that happened before we even existed.”

As is often the case with our own memories, 45 Years unfolds as a film to be pondered before being understood. And how appropriate that focusing on such instances be coined as reflection. After all, we are what we see when we look in the mirror. But delve deeper into the image being cast and you’ll find the emotions that stir them as well as shape them. The reflections may be literal, and yet they are showered with the figurative. The movie stands before itself, examining the way we see ourselves and the why behind all of the adjectives that shade its edges. Love may be patient, and it may be kind, and all whole mess of other things. So what sets this film apart? 45 Years willingly dissects its own likeness with honesty, admitting all of the aspects so many of us feverishly try to hide.

In the week leading up to their 45th wedding anniversary, Kate (Charlotte Rampling) and Geoff (Tom Courtenay) go about their days in a cozy little Norfolk cottage. A celebration is planned for that Saturday, bringing together family and friends to honor the vows they took so many years ago. We start with the couple on a Monday morning and move towards Saturday’s reception. 45 Years wastes no time in establishing its source of dramatic peaks and love-lost lows through a letter Geoff receives. In it, he’s told that the body of Katya, his love some five decades ago who passed away during a tragic hiking accident, has been uncovered and frozen in a mountainside. Geoff appears baffled, almost amazed. Kate on the other hand seems as shaken and stirred as a martini with the expected rush of sudden warmth. What first looks to be a life of bliss is undressed to reveal sutures. 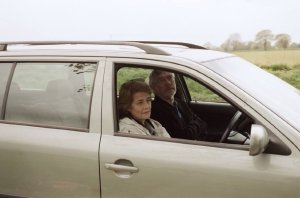 45 Years’ plot can easily be surmised. You don’t exactly need a meteorologist to forecast the upcoming storm when you see black clouds outside your window. And I think that’s what makes the film feel so genuinely real and honest. The grounded approach and authenticity serve it well, inviting us in for a cup of tea and then locking the doors, forcing us to sit through struggles of marital dynamics and personal identities in crisis. In most movies that technique with such a razor thin focus wouldn’t work. Conversely, 45 Years remains calm and collected instead of abrasive or argumentative in the face of conflict. During those moments, the characters try to vocalize how they feel. Rampling speaks with her face, purposefully donning mixed emotions we can’t easily discern. Meanwhile, Courtenay channels his fascination with the past by exploring the habits and mannerisms of his youth. Both performances are master classes. My only issue is that we don’t get to see them closely enough.

Andrew Haigh’s script is wise not beyond but because of its years. On the page, 45 Years is structurally perfect. The film remarks on the lost purposefulness that comes with age through the guise of happiness. When it comes to his direction though, Haigh inputs too much of the characters’ emotional distress into his composition of the image. The camera is almost always at a distance, deliberately showing the separation of spouses with wide open spaces. And that’s certainly useful to set the scene. But rarely does he come in close to allow us to read the faces of these people. It’s isolating and gives little room for empathy. Both Rampling and Courtenay do awards worthy work, but Haigh’s sharp script is never fully entrusted to either of his actors to give a heart and a soul. While as heartbreaking as it is affirming, it’s impossible to feel touched or moved when always an arm’s length away. 45 Years resembles a sculpture. Pristine, maintained, beautifully detailed. Kept in a museum behind red velvet ropes. Admire all you want; just don’t get too close.

“So full of history, you see? Like a good marriage.”