“The men are simply more exciting to watch.”

Even some 40+ years after the infamous tennis match between a sprite Billie Jean King and an aged Bobby Riggs, so many of the inequalities presented and combated in Battle of the Sexes are still woven through the stitches of our society. Unfair gender bias, indecent male chauvinism, closeted queer love, the reaches of Title IX rights. We’re still stunted though, and while progress has certainly been made since the 70’s – notably spearheaded and championed by King’s outspoken voice on and off the court – many of these very issues still remain. Battle of the Sexes is a worthwhile film because it presents a litany of unarguable PowerPoint slides against prejudice altogether, and it’s a deeply flawed film because it opts to play doubles instead of allowing its brightest cultural icon to shine on the court front and center. 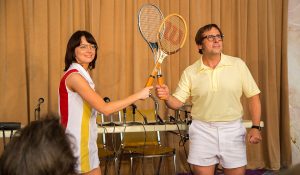 Billie Jean King (Emma Stone) faces enough adversity during the movie’s given time period to command center stage alone; she’s a beacon of change fighting against sexism and sticking it to the man. This should be a study of her personal journey, her exploration of sexuality with the hairdresser Marilyn (Andrea Riseborough), and a focused story about a feminist “libber not lobber” movement. In a way, and as it’s told to us, King’s breakthrough moment and cultural keystone bout with Bobby Riggs (Steve Carell) diminishes the power of the suppressed women at the film’s center. As a gambling addict and a past-his-prime athletic ringmaster, Riggs wanted to turn the sport into pure spectacle for cash. He sought renewed fame while King dared to give women the upper hand by facing a self-professed “male chauvinist pig,” and my issue with Battle of the Sexes is that it’s two different films forced into an unhappy marriage of opposite forces. King’s personal journey is captivating to watch and Riggs’ clownish merry andrew mentality humanizes a desperate man as we get to know him, but in this film they’re imbalanced, combative, and fenced together as cohorts with nary a chain or a link. It’s all backhanded returns and folly. 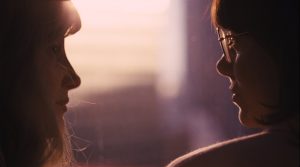 What could Battle of the Sexes have been if it divorced itself from the restraints of opposing sides and resolutely told a single story? We’ll never know, but I’m confident that it’d have been more engaging, character driven, and internally revealing. Heading into this movie, I thought having both Jonathan Dayton and Valerie Faris as directors would be a positive – especially given the typical strength of a Simon Beaufoy screenplay as the picture’s foundation – but they’ve made, however unintentionally, a film which is in constant competition with itself and its contemporaries. The cuts back and forth between King and Riggs lack artistry and connectivity. The separate story lines converge without passion. The dialogue is clunky, the shifts in action forced, and most of the script an example of a 20/20 vision painted with short-sightedness. Battle of the Sexes isn’t a bad film although it is one that tries to coast along purely on the merit of its message without honing its theme or serving up a ball worth chasing and relaying. What you’d expect to be a grand slam is instead a minuscule victory.

Battle of the Sexes might by sorely misguided in its dueling approach, and yet you couldn’t ask for two better performers than Stone and Carell to awaken such a dozy script; it must be difficult to be great in such a mediocre movie. Stone’s performance is up there with the best of her career, Carell plays the buffoon with care and with delicacy, and Riseborough lends a heartwarming vulnerability to Marilyn. The three of them are truly superb. It comes at a cost though, as the rest of the cast is designated to a subordinate status, all of them about as important as a racket or a ball. Battle of the Sexes approaches its true life story without passion. It’s rich in personality, tonally inconsistent, and a product of two separate visions grafted onto one another. Carell goes all in and sadly smiles his way through another great performance, but this movie needed to solely be about King. Battle of the Sexes lacks thoughtful direction, anticipation, or analysis of the past, and while I enjoyed the thoughtful work put in by the performers, I wished that I had been focused on one or the other. This is a great documentary that’s been squandered as a heartless and exhausted sports biopic. Too many characters with too little development leads to double-fault after double-fault.