My guess is that probably 9/10 moviegoers will at least enjoy American Made to some extent. I don’t blame them either. After all, how could they not? It’s extremely fast-paced, features a screwy performance from one of cinema’s Mount Rushmore action stars, and salutes the good ol’ U.S. of A. with its flag-bearing choice of a title. There’s patriotic entertainment to be found in nearly every scene. However, the real question remains: “what is this film trying to say?” We’ve been told that actions speak louder than words, but American Made belittles this age-old maxim by focusing on its erratic plotting rather than the full-bodied characters, taking us on a roller-coaster ride that elevates our heart rate but turns our heads into dizzied and empty centrifuges. It never quite reaches the proper altitude to fly such friendly skies.

This film is very plot heavy and it’s not without purpose either. Barry Seal (Tom Cruise) squeezed more hard, high-roller living into a handful of years than most people could even fathom. His resume is lengthy: airline pilot, CIA contractor, cartel drug smuggler, gun runner, government informant. Barry has the trust of his kids and his wife (Sarah Wright), all believers in the patriarch’s ability to provide. Seal’s heavy involvement in expanding one of the world’s most infamous and profitable drug cartels raked in so much cash that they literally didn’t know what to do with it. If American Made has a theme, it’s in this honeymooner phase of Barry’s business growth as it condemns the glamorization of excess. Cruise is excellent as expected, and yet American Made still seems to lack depth in his personal arc, more focused on maintaining likability than exuding vulnerability. I wanted – heck, maybe even needed – to see Barry get knocked down and get back up again, if only to parachute him back into our atmosphere. It’s all good fun with him and CIA agent Monty Schafer (Domhnall Gleeson), the interactions with Pablo Escobar (Mauricio Mejía), and the film’s hapless depiction of Nicaragua’s tug-of-war between the Contras and the Sandinistas. Yet with a filmmaker of Doug Liman’s ability behind the camera, maybe I just expected too much from a movie that simply aims to please.

As of late, the security of these cushioned characters are beginning to work against an actor whose best dramatic roles have come in films where he unclipped the harness, released the safety nets, and crazily stepped out onto a tight-wire act completely blindfolded (I’m thinking Magnolia, Collateral, Vanilla Sky, War of the Worlds). I miss not being forced to like Tom Cruise, entirely because he’s so unbelievably talented and capable of rolling up his sleeves and digging into a good-cop bad-cop one man show. His shape-shifting smile and ageless charisma grant him an easy entrance into our hearts, and he’s a masterful actor when he jaunts through the door and immediately betrays our assumptions by becoming another beast altogether. American Made isn’t mindless entertainment per se, but is more of a pretty product that doesn’t require us to engage much further after ripping off the plastic wrap from its casing. This film took time, and effort, and great skill. What’s absent is distinctiveness. This one leans more towards the light BA essay that is War Dogs than the Graduate thesis that is Lord of War. 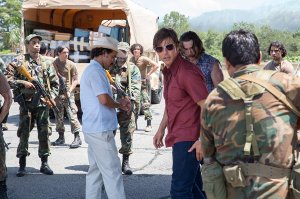 During every breath of Martin Scorsese’s masterful 3 hour odyssey The Wolf of Wall Street, it’s clear to the naked eye that the conniving and serpentine Jordan Belfort’s hamartia is greed. In every area of his life – money, success, women, drugs, material things – having just one dose or the bare minimum hit was never an option. His empty vessel of a man always wanted more, and so we knew this would be his ultimate demise. I can’t say the same for this brisk yet tepid characterization of Barry Seal. He’s a compromised man but not a morally barren one either. A moderately good guy who does a lot of bad things. What’s lacking is a motivating force behind his actions. Seal’s fatal flaw appears to be his inability to say no and the undying trust he has placed in his tight gut. American Made tells Barry’s life in the fierce manner we’re meant to believe he lived; boldly, without second-thought, and driven into action by aspirations that are unclear, or quite possibly, altogether non-existent. It makes for a fun movie that’s a bit careless with its details, far too shallow with its ambitions, and not powerful enough with its emotional hook.

“I do tend to leap before I look.”