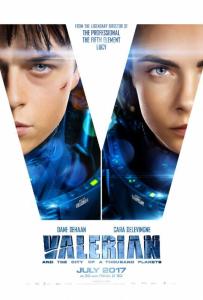 “It’s okay to be vulnerable sometimes.”

It’s hard to describe Valerian and the City of a Thousand Planets without imitating Bill Hader’s famous SNL character Stefon as he hyped up a New York night club. “It has everything: Rihanna as a shape-shifting stripper, beach attire, an alien that can poop pearls, Herbie Hancock.” All of that proves to be true and soooo much more, and what makes Valerian such a wild romp is that it never limits its own imagination. For better and for worse, the old phrase “If you can dream it you can do it,” applies to every single aspect of this film. I don’t think you can get much more over-the-top, gleefully deranged, or tirelessly imaginative than Valerian. These blessings also cast the occasional curse.

Okay, here goes – There’s a big space station called Alpha where different races and species meet and expand into a colony and eventually it must break free before destroying Earth’s atmosphere due to its mass and we visit a perfect planet inhabited by lanky blue aliens before they face their apocalypse and then the story circles back to Alpha with an ongoing search for a tiny little dino-looking creature that can swallow something up and endlessly spit the material out its rear end so Major Valerian (Dane DeHaan) and Sergeant Laureline (Cara Delevingne) are tasked with retrieving the butt-forging animal – phewwww *exhales and relaxes.* As you can tell, Valerian chooses to be about everything it possibly can. We’re taken on pointless tangents, checking for what’s behind every door in every room, floating through a story that’s been written without a drawbridge or even a moat. There are too many ways to define its mayhem. Similar to watching a Coke and Mentos geyser on an extended acid trip. Like drinking a triple Redbull vodka. The epic scale of Avatar meets the occasional minimalism of peculiar artist Damien Hirst. Valerian can and will be advertised as plenty of things; boring should not be one of them.

The big mistake is that Valerian continually hands the ball off to its two fumbling human leads down after down. Under center, DeHaan would be the cocky jock quarterback who prides himself on bedding women and is so egocentric that even when capable of traveling at light speed he still believes himself to be the center of the universe. DeHaan’s a great talent and handles the action well, but he’s simply miscast and so unbelievable in the role that he becomes a distraction. Playing his opposite, the swishing Delevingne is the smarter and more enticing character of the two when she’s not stupidly falling for this wannabe bad boy. Valerian can, at times, be a beautiful film about the advantages of diverse communities, the effects of social and political alienation, and the meaning of home. Valerian and Laureline are meant to be the hosts – inviting these guest themes in through their mutual attraction – and yet their supposed relationship is a false currency. Are the humans supposed to be the most disheartening and robotic lifeforms in the entire cosmos? I don’t know because I haven’t read the comic, but I sincerely hope the answer is still no.

The human aspect of it all might be a haunt, but disregarding that massive gap year lull, how can you not love the look of this movie? Based off the source material, the wheels in its mind spin at such breakneck speeds that it can be hard to keep up with the sensationalist artistry throughout. Filmmaker Luc Besson combines his landmark The Fifth Element with Super Mario Bros. inspired cityscapes, drawing from the knowingly offbeat and wacky humor of Spaceballs and Mom and Dad Save the World (one scene in particular marries the two together with a big hat and a wedding dress to boot) while going bigger and brighter and more exuberant than you could possibly imagine. Similar to Jupiter Ascending, Besson’s devoted Valerian could become a tried and true flop of epic proportions. I think and hope that time will revisit them both differently, and maybe then both will be recognized for what they are – 60’s era space operas dressed in CGI. Think Barbarella meets Guardians of the Galaxy meets B-movie classics. While far from great, Valerian nevertheless manages to highlight crucial moments in cinema’s history, raining down influences like confetti after a New Year’s Eve ball drop ceremony. By that measure it’s wasteful as well as enveloping.

All that’s needed to appreciate Besson’s passion project is to pay the utmost attention to its opening sequence. Watch for the countless costume changes, the careful makeup work, the passing of the baton to new commanders, the reptilian and robotic designs of the aliens. Every piece convinces us that we’re in the future and that this is how it is. Luc Besson has the confidence to act on such delusional visions and suspend our belief systems. He enchants us by having the legendary Ethan Hawke play a hippie and rugged pianist who also runs a strip joint, and then hypnotizes us with Rihanna playing Bubbles as she strips down and to and between every man’s fantasies. If you think that sounds batshit crazy, it’s probably because it is. Through that chain of events and a scene which tails Valerian mid-chase that’s basically a rush of blood to the head, Valerian is the rare space epic dignified and worthy enough to travel along the scenic route. It’s too long and too contrived, but the sights are enough to make your eyes sore. Watching this movie is like looking at the sun. The acts are illogical, the vibrancy strains the retinas, and yet when we close our viewfinders (when the curtains concurrently shut), the image is practically burned in place. Valerian is the retro-fitted, multi-colored, and duct taped prom dress of its genre: pliable, gaudy, laborious, begrudgingly voted Queen. At least this time the inadequacies aren’t dressed in the usually drab material. Valerian could’ve been great had it been less about a futuristic Charlie Brown and Lucy and more about people who aren’t already organ donors by the time we meet them, but then again, at least we get to in the first place.

“It may be the shortest way but it’s not the easiest.”