It’s as if spouses and writers Kumail Nanjiana and Emily V. Gordon – whose relationship the film is based upon – knew their love story could serve as a treatment, a remedy, or even a damn cure-all for the failing and flailing romantic-comedy genre. As such, The Big Sick attacks like a viral infection, spreading rapidly and almost incurably. And for once in your life (besides those pleasant “just sick enough to stay home from school” K-12 days) you’ll be happy to have been stricken by a fever. That’s not because the film is about death or disaster or calamity, but because it’s a shockingly honest portrayal of what it’s like to really be in love. Not infatuation. Not wishy-washy dating. Not shared fake pleasantries. I’m talking the real thing. What a truly amazing thing it is when someone allows you to intentionally sicken them with your love, and even better, when they reciprocate the malady. 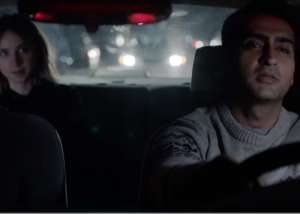 Kumail Nanjiani stars as himself, Kumail, a Pakistani by heritage and a Chicagoan by location. Most nights he performs stand-up in a middling venue with his friends (a solid trio of Aidy Bryant, Bo Burnham, and Kurt Braunohler as roommate Chris, oft the brunt of the jokes). He woos women by translating their names into Urdu on bar naps, taking them to bed on the air mattress in his dingy apartment. Days are spent driving for Uber. Some evenings are endured at Mom and Dad’s suburban home, always with the attempt to be set up with a nice Pakistani woman for a nice arranged marriage. Kumail shows no interest. He doesn’t pray to or worship Allah. His baby face has no beard. But one night he gets heckled by Emily (Zoe Kazan), a white woman, they eventually talk, and we discover their strange off-brand affection for one another just as they do. We fall for them as they clumsily fall for each other. 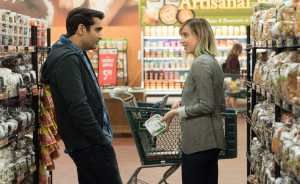 What’s so refreshing and energizing about watching this relationship strain to bloom is that these two characters challenge each other. I believe a lot of people mistake the purpose of hardship. Challenge isn’t meant to be a road block or a detriment, but more so a pinprick jolting us off our seats, forcing us to actively become better. That’s what Kumail and Emily do for each other, at least until they have their expected big fight and she falls into a medically induced coma soon thereafter. I know that sounds unbelievable. Don’t worry, this story functions better when you see it than when you read it (I mean, this is real life; it should). We don’t know if Emily will fight her way through the illness and find the light. Likewise, we don’t know if Kumail will ever find and own his identity. While she sleeps, he fumbles and searches and finally has to meet the parents.

Beth (Holly Hunter) wants nothing to do with Kumail. Emily tells her parents everything and they’re well aware of his fuck-ups. On the other hand, Terry (Ray Romano), a man with his own big marital gaffe, sees Kumail’s intentions to be true and even admirable. They couldn’t be more different: Beth comes from a family of Southern conservatives, Terry’s a native New Yorker, Kumail’s a melting pot of culture. They butt heads. But once they all realize that they’re in this thing together – that they’re stuck in the same overcast wing of the hospital waiting room – things take a turn. Despite how tremendous the romantic angle of this film is from beginning to end, my favorite part came here, with people unlike one another forced to see parts of themselves in others who look and live differently. The Big Sick is the best romantic comedy I’ve seen since Silver Linings Playbook, yet with the help from such excellent performances by Hunter and Romano, it’s an even stronger study on the forces of empathy.

Logic tells me that most romantic comedies tend to be from the male POV because my sex is the one that messes up more often than not (and because men unrightfully dominate show business). Our eyes tend to wander and we’re either too indecisive to be available for a single partner or too chauvinistic to settle for just one. Kumail falls into both categories. He feels a bit smarmy at times, occasionally unlikable with his constant “I’m sorry” attitude and only slightly lesser Woody Allen level of neurosis. We get why Emily loves him and why she comes to leave him. We know why his family labels him as dishonorable and why they still cling to him. Kumail, so snug and so scratchy, is like a musty wool blanket. Nanjiana owns his personal faults and insecurities, Kazan embodies the same of her off-screen inspiration, and director Michael Showalter corals them into what I’d call a humid comedy. The humor isn’t completely dry, not overly warm, nor is it even too wet with tears. However, it’s always uncomfortable and sticky and sweaty and smelly. That’s human. That’s the mess we make in our wake.

The Big Sick matures a cheesy quote from the quintessential okey-dokey 90’s film It Takes Two and dips its prime grade material into a hearty and stick-to-your-bones fondue. “It’s got to be that can’t-eat, can’t-sleep, reach-for-the-stars, over-the-fence, World Series kind of stuff, right?” In the best of circumstances, that’s the lofty goal love can present us with, and this is what makes The Big Sick so special; it transcends race and color and beliefs and location, restlessly investigating those deep pit of your stomach yearnings for a person you instantly understand and someone who immediately understands you in all of your complexities and peculiarities. Riffing off the Good Will Hunting line, “I gotta’ see about a girl,” The Big Sick literally sees to her with love, patience, and kindness. It’s a secular take on 1 Corinthians 13:4-8 that’s also painfully hilarious, endearingly honest, and ultimately completely free of life’s greatest tragedy: the regret that comes from having to say, “what if?”

“I am overwhelmed by you.”