It’s never a promising sign when I go through my scribbled notepad after a movie and find the followings lines: “I’m already lost,” “Literally can’t tell what is happening,” and “Seriously, what the f*** is going on???” That’s because the catastrophic Transformers: The Last Knight is a gigantic, arduous, convoluted mess. I can stand behind a film that suspends logic but never for one that chooses to indefensibly defy common sense altogether. By continuing to blindly build this franchise and expand on its endless mythology without any thought whatsoever, Transformers 5 exudes and embellishes the series’ embarrassing devotion to playing show and tell to practically no end. For two and a half hours, this vacuous blimp crashes and burns like the Hindenburg. Oh, the humanity. 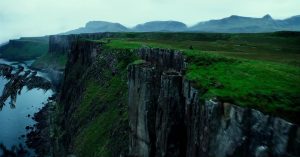 The Last Knight starts on a massive, epic scale in the Dark Ages of England as Merlin (Stanley Tucci) is given a powerful alien staff by a member of the Knights of Iacon to defeat the enemy. From there it never looks back, completely and utterly disregarding a single moment of amity. That veneer serves its purpose and is even admirable to a degree; from the production designers to the sound engineers to the visual effects artists, this film shines a bright light on cinema’s rapid advancement in technology. I’d love to see the Lumière brothers watch a movie like this and be wowed by how far filmmaking has come, as well as shake their heads at how dumbed down storytelling has devolved. What’s the point in making a movie entirely predicated upon putting people in danger when we literally never care about their well-being? Transformers has finally lost its battle with the bots.

Then we leap forward 1600 years with no safety net. Transformers 5 so glaringly wants to comment on society without ever having the wit or the subtlety to capably do so; all Transformers are hunted by a makeshift governing body to be eradicated, colored like refugees in crisis (in the entire globe, only Cuba allows their integration. That’s on purpose, too). An orphan named Izabella (Isabela Moner) refuses to leave her battleground home of Chicago, is saved by alien advocate Cade Yaeger (Mark Wahlberg), and back to his junkyard hideout they retreat. Eventually the beautiful British woman Vivian Wembley (Laura Haddock) enters the story for a romantic twist, as does Transformers historian Edmund Bunton (Anthony Hopkins) to relay pages of backstory and exposition, and then a brainwashed Optimus Prime (Peter Cullen) reenters the atmosphere to destroy planet Earth in order to save his home. Typing these sentences and trying comprehend this big babbling baby made me feel stupid. 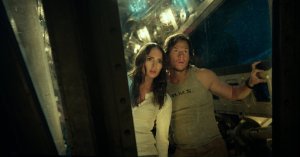 There are a lot of movies I genuinely hate, some I recommend no one ever watch, and a handful so dreadfully dumb that I honestly can’t begin to wrap my head around their sheer idiocy. The Last Knight belongs to the last category. What begins as a small snowball of time-hopping narrative rolls down the hill as fast as Clark Griswold on his lubed up saucer sled, hoarding big and heavy ideas along the way until it finally comes to rest and settles for being an abomination caught up in flames. I’ve seen toddlers create stories in their heads and attempt to vocalize those thoughts that made more sense than this draining diuretic disaster. That’s not an exaggeration. Transformers 5 is a horrible, reprehensible new low for the waning series.

Since this is a Michael Bay film, there a few catch-alls we can expect going in: a reliance on tilted dutch angle shots, a heavily saturated image, too cool for school one-liners, bodies and cars flying and falling like leaves from a dead tree. And despite how absent-mindedly everything unfolds, recognition is deserved for the coordination of the stunt work. Transformers: The Last Knight is never an outright boring movie; I’d venture to guess that less than 100 shots in the entire film last for more than one second, putting a massive load on the movie’s editors whilst humming along at a speed far beyond idle. It’s shocking how easily this deafening experience goes in one ear and right out the other, and how it can somehow be watched without ever being seen. I still don’t know what the hell happened.