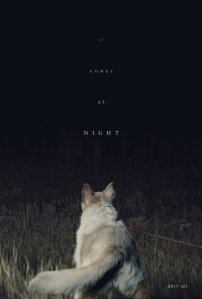 “Do you have any idea what’s going on out there?”

It Comes at Night drills itself into your psyche with a rusty, diseased tip, unfolding in the likeness of a great Shakespearean tragedy set deep within the sprawling wood. I’d compare it to an evergreen Garden of Gethsemane never graced by the healing presence of Jesus. Instead of prayer, what occurs is claustrophobic and charged with the intimidation of a confessional with a high priest. The picture is stuffed to the brim with doubt, disdain, and the deceptive barrier we allow to rise between those we call family and the strangers we cautiously try to trust along the way. No other film thus far in 2017 has forced me to so deeply consider its themes, its unknowable secrets, and the proverbs hidden throughout while still in search of hopeful meaning somewhere amidst its nihilistic nature.

The disease started in the city, so it seems. Boils splotch the skin, burgundy blood spills from the mouth, eyes turn to vacant cataracts. Executing his father-in-law is not easy for Paul (Joel Edgerton). On the contrary, it’s a purgative sight for Paul’s son Travis (Kelvin Harrison Jr.). Sarah (Carmen Ejogo) insists that Travis didn’t need to be present; Paul persists that he couldn’t do it alone (the images, in a crowning testament to visual storytelling, tell us otherwise). Travis reels in the wake of losing his Grandfather and his friend, restless in bed and a victim to constant nightmares. He talks to his dog Stanley, cautiously walks the boarded up compound with lantern in hand, breaking the pro tem rule of law established by his protective dad. Then a stranger breaks in and the film, as well as this small family, is forever altered.

Will (Christopher Abbott) assumed the house was abandoned. Windows covered in plywood, not a light to be seen. Paul and Sarah greet the pilferer donning gas masks and bearing arms, unsure if he’s infected. Paul ropes this anathema of a man to a tree, waiting to see if he shows signs of illness. A day later and he’s as clean as a whistle yet dirty as a squatter. Will speaks of his wife Kim (Riley Keough) and his son Andrew (Griffin Robert Faulkner) hiding miles away. “Tell me the truth or I’ll shoot you,” Paul says, and Will’s words persuade. Two families come together as one unit. Sarah shows Kim how to boil batches of water; Will teaches Travis how to handle an axe. It Comes at Night expertly and concisely structures each of its acts in the manner of a formidable play. An open in a tested middle ground. A chance choice leading to a surprisingly familial second act. And an isolating finale that separates the bloodlines into dueling dugouts of paranoia.

Neither team comes out victorious or untainted. Major questions are glazed over or forgotten altogether. When it comes to figuring out who illicitly opened the dreadful and unforgettably gloomy red door to the infectious world outside their cooped up walls, we aren’t given a white flag waving culprit to blame. This will infuriate many American viewers because of their poor and high calorie cinematic diets, so used to being fattened with answers and resolutions, especially within the manipulative machinations of the horror/mystery genres (the film’s dreadful D cinemascore reflects this point). It Comes at Night is not an easy film to interpret or understand, and while it sounds safe or convenient for me to say, that’s the entire point altogether. This is a film full of timely thematic messages: a sudden disconnect from the interconnected technological grid, a heightened sense of suspicion for outsiders, and placing a high-dollar value on blind assumption over factual truth. Rather than jolting us with jump-scares, It Comes at Night carefully builds its tension with one slow turnbuckle twist at a time. The end result is masterful.

While the film builds towards its tormented conclusion, the audience becomes one with the character Travis. He’s a fly on the wall, prone to visions, sneaking about and eavesdropping in the attic, believable but also always a bit uncertain of himself. Travis doesn’t know if he’s part of the problem or a component of the solution. Neither do we. Events happen and things pass and catastrophe ultimately strikes. Following his remarkable micro-budget debut Krisha, writer/director Trey Edward Schults hones his influences (most noticeably Kubrick, Carpenter, and De Palma) into one swift guillotine strike. With It Comes at Night, Schults embodies the fear experienced in the dark unknown and visualizes the “it” in a way that feels both knowable and personal. The “where there’s smoke there’s fire” ending makes more sense the more you think about it, and becomes even more desperate and desolate over time. In only his second film, Schults has bred elements of The Shining and The Road into a film for this age. I still feel it’s questions tattooed at the nape of my neck. They itch, and I can’t quite scratch them away.