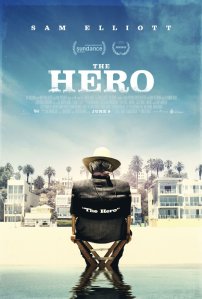 “Movies are other people’s dreams.”

Whether it be male or female (but definitely more unusual for women), roles for actors well past the twilight of their youth come too few and far between. Allowing 72-year-old Sam Elliott to anchor every scene is both worthy of commendation and a smart move to boot, his rangy frame and tuba voice echoing blimps beneath that bristled upper lip. The Western veteran can still charm the skin off a snake, and it’s Elliott alone who keeps the sporadically clichéd The Hero from devolving into little more than contrivance. That says as much about Elliott’s performance as it does about the film. 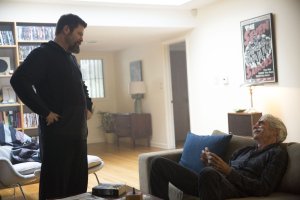 Lee Hayden has been on the back forty of his career for some time now. An advanced pancreatic cancer diagnosis doesn’t help to motivate his comeback. Paychecks come from residuals and voice work; Lee enters the film reading for a BBQ commercial sounding like the god of grilling season. There’s no real relationship between him and ex-wife Valarie (Katharine Ross) or his estranged daughter Lucy (Krysten Ritter). His only meaningful friendship – if that’s what you want to call it – is with his weed guy Jeremy (Nick Offerman). One day after a few joints and a coffee table covered with Chinese takeout, Lee meets Charlotte (Laura Prepon). She’s younger, from the looks of it maybe half his age, yet their eyes still linger on each other. It’s not an attractive meet-cute, but we definitely know we’ll see her sooner than later. 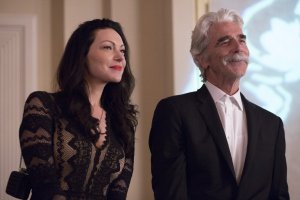 What do you know, Lee and Charlotte cross paths at a food truck. “Best tacos in L.A.,” she says to no response. The chemistry between Elliott and Prepon permits us to go along with the absurdity of their “last wish-fulfillment” fling for the declining Lee. They’re interested in each other, partying hard at a Western Lifetime Achievement Award ceremony, sleeping together, getting to know one another. Flip the script and you’d have a combination of All That Heaven Allows with the comedic run of The Graduate (making Katharine Ross’ slight use maddening). As the centerpiece of the film, I’d have to say it works decently, earning laughs and insights when the story steps back and allows itself to hunker down in the moment. It’s the rest of the movie that doesn’t gel. Remember when I mentioned Nick? Valarie? Lucy? Besides a few good lines from the reliable Offerman, the trio are as elaborate as Guess Who? game cards.

Maybe that’s reflective of Lee’s old age; his story and those around him has neared its end. Maybe it’s indicative of lazy writing. I don’t think it’s both, and I’d side with the latter given Brett Haley’s past work. The Hero is eerily similar to his 2015 film I’ll See You in My Dreams. From that movie, Haley has plucked Elliott’s scene-stealing character and given him new life in a marginally different backdrop, gifting this male lead more privilege than Blythe Danner’s character in Dreams. Both films involve relationships with younger folks of the opposite sex but only one turns off the bedroom light. Both movies involve loss, but one is about losing another person and one is about losing oneself. I’ll See You in My Dreams is the better picture of the two because its outside world actually means something. As for The Hero, we get Sam Elliott doing what he does best, and in the rare case, it’s enough energy to leap over the occasional puddle.

“You are a creature of habit, if ever there was one.”