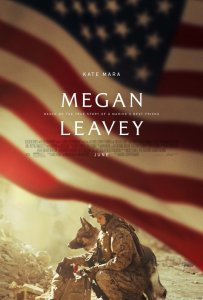 “Everything you feel goes down leash.”

The best films set during the war in Iraq are not exclusively about war. The Hurt Locker – a rightful Best Picture winner – deals with addiction to a dangerous lifestyle and an inability to adjust to normalcy. The Messenger follows soldiers in pain as they try to adjust to past lives while being irreconcilably different inside. Perhaps the most politically charged picture is The Wall, a film that manages to incriminate both sides of the war. In the Valley of Elah breaks our hearts as a father asks “why?” to no avail. And then we have Megan Leavey. It’s the most lighthearted entry of the bunch, destined to move and sadden audiences, but that doesn’t diminish its uplifting reminder that being idly alive and actively living a full life are not the same thing. 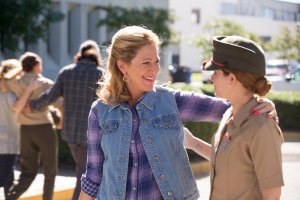 A brief opem with vague voice over introduces us to Megan (Kate Mara in another great performance) as an outcast with no purpose or clear direction. She’s fired from the daycare facility she works at for being hungover and told, “you don’t connect with people very well.” She can’t refute this statement because she knows it to be true. Life at home pretty much sucks for Megan. She recently lost her best friend to an overdose. Her mom Jackie (Edie Falco) lives with the jobless Jim (Will Patton), former best friend of her father Bob (Bradley Whitford). The young woman is alone and floundering, wilting away leaf by leaf. By chance or by fate, Megan sees two Marines entering a building with a sign outside promising recruits an opportunity to see the world. Impulse sends her to training and eventually to the front lines. 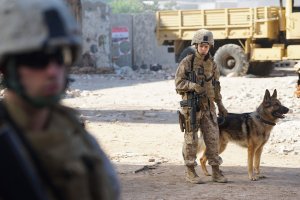 While I found the film to be a bit cumbersome and overlong in stretches, I can’t decry its willingness to submerge the lead character into such grueling circumstances right off the bat. We hardly know Megan to begin with, and then she’s suddenly doing pushups and being screamed at and dehumanized. It’s a logical choice of direction from Gabriela Cowperthwaite, entirely because her act is impulsive, and so the film must have a similar feeling. I’d like to imagine that many of our courageous recruits would agree; Megan Leavey understands this quick surrender to country and authority and a regimented lifestyle comes swiftly. That being said, what makes this movie so impactful and so unrelenting in its emotional pull is that it capably simplifies Megan’s circumstance without dumbing her down. She’s a smart, fractured, lost woman looking for purpose. That she finally finds a companion in a K9 military dog is less important than the fact that they both find each other. 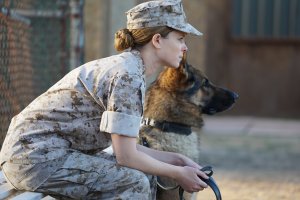 Megan enters the dog training facility as punishment for drunkenly peeing on official quarters, sentenced to a week of cleaning literal dog shit. There she comes across Rex. He’s a ferocious fighter, deemed unadoptable post service by the stern vet, a wild animal ready to snap. In the film’s most affecting scene, Rex jumps onto Megan’s bed to her surprise. Later on her even farts and falls asleep as she continues to talk. That’s not just an owner to pet relationship; it’s a loving and comfortable camaraderie. Many of the human pawns in Megan Leavey go uninvolved or unfulfilled, but I’d argue that they are in place to justify the eye to eye candor and affection between a handler and her fellow warrior, an incredibly brave leader and her companion willing to follow her every step. Megan Leavey humanely depicts the trauma of PTSD, illustrates the sacrifice of our compatriots, and does all of this while maintaining its emotional core without becoming unrightfully politically motivated. This is a movie about a waif woman, a stray dog serving a lifelong military contract, and the battles both face outside the war zone to defend and to ensure the safety of those they love. How much we come to care about them separately and as a whole is the picture’s entire success.

“Sometimes we don’t realize as much as they’re our family, we’re theirs too.”