“Is it okay that I’m kind of loving this?”

If you were to trade out the deviant bromance of Superbad for childish potty humor and sprinkle in a dose of Ferris Bueller’s Day Off stylistic fourth-wall breaking self-awareness, you’d end up with the surprisingly thoughtful and insanely smart Captain Underpants. It’s a movie that spaces out during class and doesn’t bother to study the formula of most family friendly features. Derelicts and class-clowns may never bring home a report card full of straight A’s, but that’s not indicative of their intellect or their humor or their heart, all which run rampant and wild throughout Captain Underpants. This is a creatively drawn world, and one that allows kids and adults to laugh in harmony. We forget how rare that really happens. 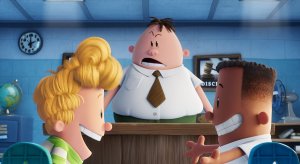 Best buds since Pre-K after they both laughed at their teacher describing the planet Uranus, George (Kevin Hart) and Harold (Thomas Middleditch) have been attached at the hip. They’re neighbors, confidants and collaborators. The end of the day bell sends them jetting back to George’s decked out treehouse to make comics together. George is the writer and Harold the illustrator, combining their strengths to create the kind of wild tales spinning around in the heads of most children. None of their efforts top the creation of Captain Underpants, an undressed and klutzy superhero with an uncanny likeness of the hard-hearted principal Krupp (Ed Helms).

Krupp’s a bit like Matilda’s Miss Trunchbull without The Chokey or the riding crop in hand, a sad and lonely adult with a disdain for children, which needless to say goes against all the necessary features of a quality educator. Countless pranks and trips to the principal’s office by George and Harold only fuel Krupp’s totalitarian methods, and once they’re caught red-handed, he finally has sufficient evidence to place the boys in separate classes. What’s literally – and quite hilariously – already depicted as an elementary penitentiary becomes a stint in isolated confinement. But with the help of his trusty plastic cereal box ring, George manages to hypnotize Krupp into becoming Captain Underpants. A Hanes superhero is born. He’ll come in handy to help battle new science teacher and mad inventor Professor Poopypants (Nick Kroll).

The third and final act of Captain Underpants is where an adaptation using real performers would have soared off the rails. However, since this is animation – that’s quite unique and rather beautiful to look at – the audience is never asked to suspend their belief. Instead we jump into the foray, the fits of madness and hijinks, and there we find a nugget of truth you’d tend to encounter in an old Robin Williams film (think his fast talking Aladdin genie meets Patch Adams here). Written by Nicholas Stoller and directed with a childlike mind’s eye by David Soren, Captain Underpants adds an exclamation point to its already impressive execution by assuring us that laughter really is medicine. That it has the power to elevate us from the brink of boredom and seriousness by being able to poke fun at one another while also having the capacity to laugh at yourself. It’s been too long since I’ve gone to the theater and seen parents crack up as often as their little tykes. The film really is one big Scholastic Book Fair come to life that will excite children and finally give adults a little something to look forward to, and after all the evening school library visits I put my own Mom through to buy countless reads, I can assure you that means a lot for kids and parents alike.

“It feels so good to laugh.”