There’s something about Sing, despite its many miscues and lapses in judgement, that registers in a really personal way. Even when things go bad and the film falls into some rather predictably overblown drama, it manages to override such defeatism because its roots are so firmly planted in an infectious sense of positivity; one of the running themes tends to be “where there’s a will there’s a way.” Sing isn’t one of the year’s better animated features, but it is fun, fast, and sets a sterling example for children to do what they love and to share their gift with the world.

The spark plug behind Sing’s persistent bright side outlook is Buster Moon (Matthew McConaughey), a little koala cub running a big theater. He’s basically a one man show behind the curtains, helped by his loony secretary Miss Crawly and sometimes by his wealthy black sheep friend Eddie (John C. Reilly). Moon’s track record at the theater hasn’t just been hit or miss during his tenure; it’s about to be railroaded and repossessed by the bank. But Moon is a preservationist of showmanship and theatrical history, determined to legitimize his passion and restore the legacy of the once thriving landmark. What better way to gain publicity and attention than by hosting an American Idol inspired singing contest? Imagine that show with three Paula Abduls as the judges and that’s the kind of sugar-coated approach Sing takes. 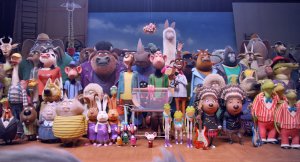 A clerical error inflates the $1,000 prize money 100 times over, drawing in all walks of life on both hind legs. The auditions are funny too, partially because some are disasters like William Hung, but more due to them being so ludicrously conceived that you can’t help but grin. Luckily for Moon, there are diamonds in the rough to be found. Johnny (Taron Egerton) is a more pedestrian Sam Smith, wanting to be a singer but hounded by his father to join the gang. Rosita (Reese Witherspoon) lives the life of a housewife; too many kids, too many chores, too little time, ungrateful husband. She’s got pipes though. Ash (Scarlett Johansson), previously a punk act with her boyfriend, gets the golden ticket by herself. And then there’s Meena (Tori Kelly), perhaps the most gifted of them all, so overcome by stage fright that she accepts her position as a stagehand, at least until Moon needs another act. Sing is an above average movie when you consider only these pieces, especially an endearing and undeniably cute ending. However, it’s the remaining cards that make this house fall down a notch.

The big head scratcher for me is Mike (Seth MacFarlane), a crooning mouse who swindles and cheats Russian bears in poker. Sing is such a good-hearted and likable story that neither Mike nor his dirty conflicts ever gel with the rest of the film, let alone add anything worthwhile. Not only would erasing him from the script and adding dramatic stakes around the main characters feel more organic, it’d lead to a more empathetic experience. The picture’s clear racial bias also devalues the overall communal enjoyment (i.e. gangster gorillas in jail, a rich and presumptuously Jewish sheep, Asian inspired foxes who giggle and laugh and dance). Sing badly loses to Zootopia in the race crusade. But it’s a well-directed, finely voiced, near two-hour diversion that will have kids actively thinking about kindness and adults engaged on a level surpassing Illumination Entertainment’s usual stockpile garbage of fart jokes and physical gags. Sometimes to get a kid to eat something new, you have to convince them that they’re eating something old. The textbook “that’s chicken, not shrimp” maneuver works well. Sing tastes like most animated films of the modern era: processed, routine, a little too sweet or too salty. Then you look in the bag and find a handful of fortune cookies. You break them open and they convince you that this is a level above the average competition. Maybe that’s not a big enough distinction, but it shows life’s scale of ups and downs more accurately than any Happy Meal ever could.