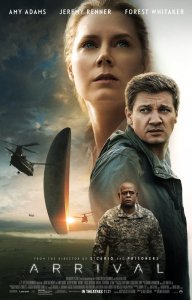 “We are so bound by time. By its order.”

I was recently recommended a podcast called The Ezra Klein Show. Klein’s a liberal journalist and the editor-in-chief at Vox. Klein, so eloquent and adept in conversation, thinks like I do. We process information literally and through our objective reasoning maintain the position of right versus wrong and good or bad. One episode has him interviewing Arlie Hochschild, a professor of sociology at Cal Berkeley. Hochschild discusses the passion and the reasoning behind ardent Trump supporters through her subjective methodology, and the position is utterly fascinating. Her defense is empathy. With it she strikes common ground, acknowledging differences while searching for some kind of unity. You really can empathize and disagree without compromising your own morals or beliefs. My view is too objective, Hochschild’s too subjective, and Arrival – an intimate epic with ambition and form – is a harmonious, masterful collaboration of the two. 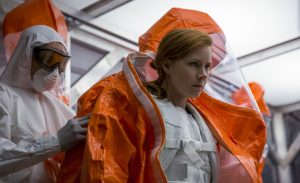 Hochschild doesn’t take things at face-value. Rather, she looks for what she calls the “deep story,” searching for why somebody could think so dissimilarly. Her approach is calm, graceful, and a sworn testament to the human race’s ability to be so different and eclectic yet shared and whole. Linguistics Professor Louise Banks (Amy Adams) attempts this same task. Banks is at the top of her field, and when the alien Shells arrive – 12 spread across the world – her company is requested by Colonel Weber (Forest Whitaker) in Montana. Louise is to be the semantic translator while theoretical physicist Ian Donnelly (Jeremy Renner) deciphers through science. The ships open every 18 hours. Into the hull they go. 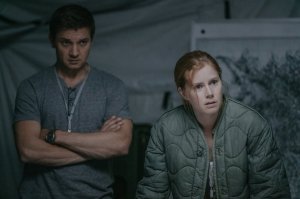 Separated by a pane of glass, Louise and Ian try to speak with two heptapods, creatures with 7 tentacle-like legs supporting a towering upper body. Adams’ portrayal of Louise is so meticulously crafted, and her character so adaptable. I’ve always believed that you can judge a stranger by their cover but that you’ll never read them unless you look inside the binding. Louise does this, shedding her protective gear and directly interacting. She establishes lines of dialogue, diagramming sentences and performing perfunctory tasks. But people across the globe hear that the word “weapon” has been used and chaos erupts. Nation to nation communication is cut off, warfare is eminent, the shells are deemed threats. The film has a fairly lofty twist, and to divulge more would be to give hints as to what’s in store. But even without the spin on its Close Encounters of the Third Kind yarn, the movie is a wrecking ball of the now. Opposition of globalization and immigration are rudimentary fears of the unknown, itself a primitive language we all might not be willing to speak but certainly comprehend. Arrival uses this to its advantage every step of the way. It’s an intense, wry, compassionate, and spiritual journey. 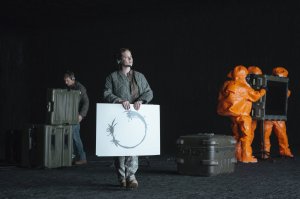 I used to have this nightmare two to three times a week for years. Alone on a tugboat, lost at sea, middle of the night. A squall whipping up waves as I sat there waiting to capsize and drown. Then I’d see a lighthouse beam lit in the near distance, guiding me to shore. I’d beach the boat on the sand and sprint to the tower. But there was no door, no ladder, no way in. So I backed away and looked to the top. Because of the light’s position, all I could see was a silhouette. Slender figure, long hair, somehow knowingly effeminate. She’d gracefully step forward and place her hand against the foggy window, playing out like a much darker version of the Disney song “Candle on the Water.” And then I’d wake up. The only reason that dream terrorized me was because I was so focused on the negative aspects of fear. My interpretation couldn’t have been more wrong. Similarly, Arrival makes you second guess yourself because it can only be read through its own hypnotic logic and language. The effort needed to decode its metaphors is returned with bountiful dividends. 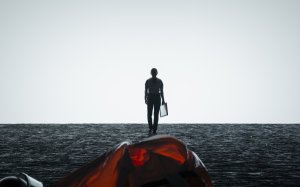 That dream of mine always seemed like an isolating omen, the embodiment of sinking into an overwhelmed and exasperated state of anxiety. But this masterpiece from Denis Villeneuve – one of the finest filmmakers on the planet – made me rethink myself. With help from the amazing work of his cast, Bradford Young’s stunning cinematography, and Jóhann Jóhannsson’s phantasmic score, Villenueve tempts us to march towards unexplored lands. To say yes to positive experiences even if we know we’ll eventually end up grieving, embracing sorrow as an outcome of unbearably strong and temporary love. And that our differences should cause no pause to reciprocate gratitude, affection, and a human healing hand. The poet Samuel Beckett once wrote, “They come. Different and the same. With each it is different and the same. With each the absence of love is different. With each the absence of love is the same.” The film’s appearance might seem stark, but like Beckett’s words I found its power to be profound, personal, and penetrating. Arrival emphasizes that confidently walking towards fear is the entire purpose of life.

“I don’t claim to know how your mind works, but I believe it was important for you to see that.”