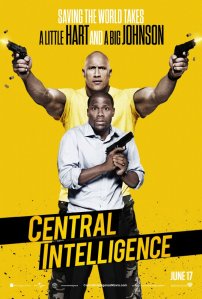 In the late 1980’s, John Candy had a legendary stretch from 87-89 starring in such films as Planes, Trains & Automobiles, The Great Outdoors, and Uncle Buck. For how memorable the movies are still to this day, they’re undeniably homogeneous, like a screwball take on Japanese auteur Yasujirō Ozu’s famous “Noriko Trilogy.” The same basic character inhabits different stories. In the case with Candy, his characters were unwanted and unloved schlupps who always got people to eventually warm up to him by being innocently loyal. Central Intelligence does just that. It certainly doesn’t match the bar set by the aforementioned titles, but it’s a good take on the genre infused with a crime influence worthy of a background check.

20 years ago at Central High School, Robbie Weirdicht (Dwayne Johnson) was the overweight and friendless sap in the senior class. After a humiliating prank involving full-frontal exposure during an assembly at the hands of bullies, his only aid was Calvin “The Golden Jet” Joyner (Kevin Hart), the most popular and established kid in school. Fast forward to the present, Calvin’s married to his 12th grade sweetheart, working an accounting job he thinks to be below his potential. In his mind, Calvin has gone from hero to zero, so when Bob Stone messages him on Facebook for drinks, the lucky loser obliges. Bob turns out to be a reconfigured, Herculean Robbie, and the secretive man latches onto to Calvin’s friendship from so many years ago because it’s the only sense of brotherhood he’s felt. Central Intelligence’s plot can be incoherent, but the bond between these men always feels convincing. 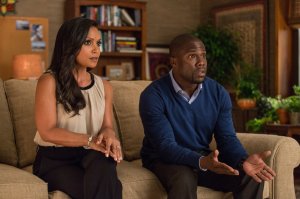 The progression of the story doesn’t matter as much as the development of these characters, which is definitely a trade-off, but if you’re going to do so it might as well be in that order. There’s a stupid terror plot, the fate of the free world hangs in the balance, only these two suspected criminals can pull it off. The events grow at the rate of a fisherman’s tale. However, Central Intelligence has a formidable duo in Johnson and Hart, both playing a bit opposite of their stereotypes. As Bob, Johnson implements a lot of doofus rhetoric. Science proves people can get intellectually and emotionally stuck in a childhood state following a deeply traumatic event during their youth; the man-child Bob functions off of that finding. And for once Hart gets to be a little quiet, showing more control and more trust in his counterpart to lead as a whole and not separately. Love or hate the story, it’s still fun to watch two actors genuinely enjoying each other’s company. 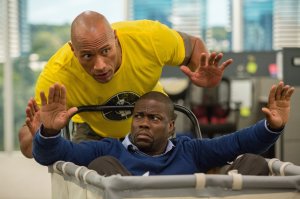 With Dodgeball and We’re the Millers already on his rapsheet, director Rawson Marshall Thurber shows great comedic timing and an inclination for action pieces in this incredibly difficult genre. I’m starting to realize that comedies are hard to make because jokes can be hard to write. The most successful blend funny situations with improvisation, and Thurber’s movie does just that. Granted, you might think the ending to be self-congratulatory and effacing, yet don’t forget to compare our first encounters with these men to our last. The drastic and risible correlation makes sense because they’ve changed and grown-up while largely remaining true to who they are. Central Intelligence cosigns that same fate with peaks and punches both up and down, mostly delivered at all of the right moments.

“Be the hero of your own story.”

One response to “Central Intelligence (2016)”