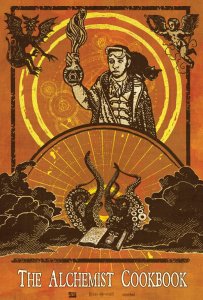 “Your brain is fried.”

Michigan native Joel Potrykus makes polarizing movies that continue to sway me towards pledging allegiance to the opposite cap of his cult loving audience. 2014’s Buzzard did nothing for me, and with The Alchemist Cookbook, he’s made a film which I genuinely loathed. Two separate entries in my notes read, “offensively dumb” and “soul-crushingly empty.” Potrykus’ odd fascination with an at times lax or a spiked paranoia feels more like the kind of story written down and then torn from an amateur’s loose-leaf notebook than one told by a filmmaker trying to be taken seriously as a storyteller. 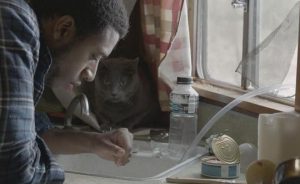 The movie has 5 characters. Sean (Ty Hickson) is the protagonist. His relative Cortez (Amari Cheatom) brings him groceries and supplies. Kaspar the cat plays Sean’s confidant. There’s an evil spirit in the wood. And lastly, I’d lump Sean’s red trailer and the wilderness together into one element with two faces: a welcoming hideaway dropped down in a castaway sea of fallen leaves and timber. We’re not sure how he got there or why, subjecting us to a shallowness and apparent improvisation rather than depth and characterization. It doesn’t take skill to make a film like The Alchemist Cookbook; it takes indulgence to the point of bordering on intemperance. 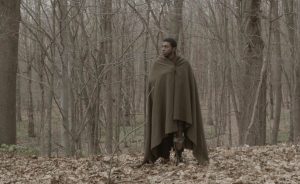 Right out the gate we can tell Sean has mental health issues, a situation that becomes heightened when he accuses Cortez of forgetting an important prescription to go with the rest of the loot. As Cortez, Cheatom steals all there is to be taken from this disaster, showing strong comedic chops and an ability to go dark. You’ll be seeing him again. Ty Hickson isn’t bad either, but the role is a mockery of instabilities, treating psychological problems like an infectious doomsday virus instead of an actual illness. We have to see him munch on Doritos in long takes, slurp a bowl of cereal, spit Faygo onto a fire, wrap himself in Christmas lights. Every component is tied to a picture we see twice; I suppose it’s a young Sean with a maternal figure. His split personality stuck and torn between a frolicking adolescent and a troubled young adult dreaming of hitting it rich, somehow and someway.

The Alchemist Cookbook could have been made by anyone, starring anybody, and would have received my same response. And that’s because this is a horrible movie. It has all the skill of telling ghost stories around a fire, except it’s the loner still sitting there at 3 AM burning the midnight oil for the one happy drunkard willing to listen and imbibe the filth. The movie doesn’t grab you, doesn’t engage conscious thinking, doesn’t allow us to read the images. Potrykus has made an appalling and abhorrent film meant to offend, allude, and induce psychosomatic decay. Besides an introduction to these talented young actors, I can’t think of a single justification for it to even exist.

“You failed both of us.”

One response to “The Alchemist Cookbook (2016)”