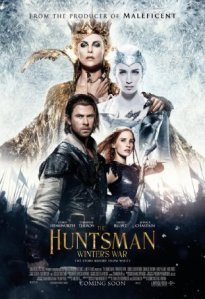 “You know much…but you do not know all.”

It’s baffling how closely The Huntsman: Winter’s War resembles 2014’s Maleficent. Both films hail from the same producer, favor impressive visual worlds over memorable dialogue, and try to do too much in too little time. That spells trouble in the dictionary of cinema. And while neither movie dwells in the realm of the unwatchable, they’re both immediately lost to the floodgates of short-term memory. What transpires on-screen doesn’t matter all that much, really. How these characters change tells us little, if anything. The unoriginal concept relies on contrivance instead of cleverness, spoiling the possibilities. The Huntsman: Winter’s War gets too soft and too conventional when the going gets tough.

The movie’s premise can be boiled down to Frozen for adults, leaving me stupefied as to how not a single person on the production team addressed the eerie similarities and thought to implement some necessary changes. As a strange hybrid vehicle of prequel/sequel storylines, the movie chases after so many angles that it eventually becomes obtuse. Queen Ravenna (Charlize Theron) is warned of the birth of her sister Queen Freya’s (Emily Blunt) daughter, destined to be more beautiful than thee. Freya’s child is murdered, unleashing her sorceress powers hidden up until then. To bridge the maternal gap, Freya stockpiles a child army to defend her kingdom. Eric (Chris Hemsworth) is the titular Huntsman, fighting alongside his love Sara (Jessica Chastain). They grow up together and dutifully guard Freya’s ground, only until they are torn apart as an attempt to refute the power of love.

After serving as the effects supervisor on the first film, Cedric Nicolas-Troyan is handed the directorial reigns this go around. True to his specialization up until this point, the movie at least looks good. Crisp colors, nicely choreographed fight sequences, decent CGI outside of some garish goblins. Watch it on mute and you still get a pretty picture to look at. However, the film says almost nothing worthwhile. There are relationship woes, a sibling rivalry, the effects of losing a child. Some pretty interesting topics were laid out to be further elaborated upon if only the script had chosen to do so. The Huntsman: Winter’s War bucks those sensibilities by going for schlock. Unwitting one-liners dilute the cast’s talent. The actors depend on snarky smiles and vacant eyes. Their interactions as warm as the frozen tundra landscapes. A fairy tale can only be as good as its relatability within the real world.

By ditching the original’s inclusion of Snow White – probably because Kristen Stewart knew better than to return to this series – The Huntsman: Winter’s War becomes increasingly difficult to follow. There are too many gaps to mind, not to mention a seven-year leap where characters don’t age or change. The bigger picture, and the larger conundrum, should bring into question the film’s desperation to be new while still settling for being so damn familiar. All of the comparisons and games of association subtract rather than add, making it hard for me to imagine that they’ll try to revisit this franchise anytime soon. The Huntsman: Winter’s War can whet the eyes by being seen without ever really being heard, because more often than not the words fall under an undesirable distinction by ad nauseam.

“Love is nothing more than a fairy tale.”