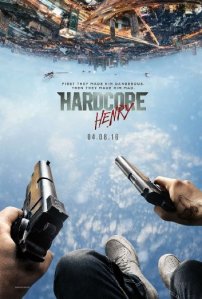 “You were never a big fan of my work. Maybe this will change your mind.”

The chauvinistic theme of Hardcore Henry can be found in the film’s opening scene. We’re posited as a young Henry, made to see a flashback world through his eyes. Following an encounter with a gang of bullies, a man (Tim Roth, presumably playing the father), approaches the boy. “You…little…p****,” he says with disappointed disdain, sounding like one of those high school football coaches who never lived up to his own potential. And neither does this movie. It’s hard for me to find value in a film that refuses to be seen. I say that because nearly 50% of this glorified POV gamer gratification ride is literally indiscernible. A whirling dervish that presses pause before firing back up again. Hardcore Henry transpires as technical magic but forgets to add showmanship to the entire charade, leaving us in the blind and in the frenzy. 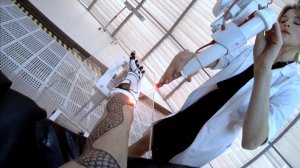 Henry wakes up from that memory in an unfamiliar place, blown to bits and pieces, his wife Estelle (Haley Bennett) attaching cyborg limbs to his frame in her testing room. Before she can install his voice system though, the lab is ransacked by telekinetic mastermind Akan (Danila Kozlovsky). He’s after Henry and the technology housed inside him, who manages to escape through a pod with Estelle. She’s abducted, Henry fights a lot of goons, and then runs into a man named Jimmy (Sharlto Copley) who wants to help. The remainder of the film is a masquerade of muzzles and parkour and nonsense. I’ll admit that some of the shots are rather amazing, and I’d love to see how they were captured, but they remain left in an empty void of a story with no context or character. If ever there was a movie whose tagline was, “look what I can do!,” Hardcore Henry would be it. 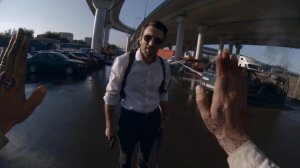 The ambition of director Ilya Naishuller should be admired as much as it needs to be admonished. His intent is as straightforward as a roller coaster operator. Strap us in, start the ride, and once we get to the starting point propel us right back into the launch track for another uphill climb. Where the move fails, rather miserably, is its total lack of depth perception. Henry can fall head over heels from a motorway to the streets below, but we don’t get a sense of height. He can jump from one building to the next, but with absent-minded distancing. Hardcore Henry emphatically tries through its visual style to put us into the body and the head of a badass super soldier without a story that can possibly make-up for the imperceptive deficiencies. What’s meant to be immersive becomes isolating because it is so shortsighted and constantly aslant. 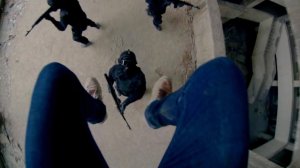 Up to this point, a number of critics and media insiders have lauded the film as visionary and unlike anything that’s come before it. To counter that argument, I would steer them towards the very art medium that Naishuller is copycatting. Although I am not a gamer myself, it’s not hard to acknowledge their community’s transition from pure artifice to pieces of expressive narrative. The perplexing position of a film like Hardcore Henry is that it wants to impersonate but not elaborate upon another storytelling avenue by using the powers of its own choosing. Strictly from a composition standpoint, movies are harder to tell than games. Here, they must be more succinct, driven, and specific. This film does none of those things, feeling too full of pride and pretension. Some may see it as kitsch, but from what I saw, or the lack thereof, Hardcore Henry is a case of vertigo best avoided.

“Something about a spine snapping…now it gets old.”