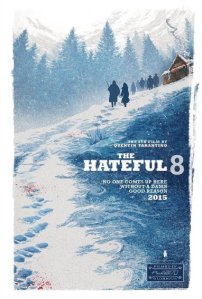 “No one said the job was supposed to be easy.”

What a treacherous journey to the screen it has been for The Hateful Eight. First a leaked script, now numerous theaters incompetent at projecting 70MM film and ruining showings. However, those are little problems when compared to Quentin Tarantino’s 8th feature (a number he haughtily reminds us of). The movie is almost 3 hours long with maybe 30 minutes of substance. The characters are interchangeable, like shoddy spare tires borrowed from past films unable to sustain such wear and tear and miles. Tarantino is a masterful filmmaker with a head that’s a library for moviemaking. And that’s the upsetting part about this picture. The Hateful Eight is his attempt at an evergreen Western fueled and then torched by his signature blend of defiance and disregard for civility. He has planted the wrong seed though, because this lamentably boring bloodbath grows no bigger or taller than a diminutive ponderosa, rooted in the cold, left barren and uncultivated by its creator.

There are many faces to this chapter by chapter tale, none any more memorable than the next, all adding as much personality as a sycophantic doer of pure evil can. Tarantino’s movies have always been structured around social themes, and here with a hodgepodge of vulgarity, racism, and sexism, he plots pieces of our politically correct culture into a frontier that gives two “you know whats” about the feeling. The subtexts clash, not in a good way, making this film completely devoid of a single shred or semblance of humanity. Even for QT, The Hateful Eight feels overwhelmingly brash and debased. We can’t comprehend the behavior up on-screen. If that’s a purposeful technique, then I’m all for it. But since these stereotypes embody hate and hate alone, the viewer must be able to rationalize their barbarous actions through meaningful dialogue. In that regard, saying a lot has never said or meant so little. 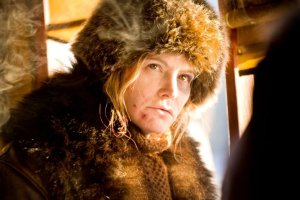 John Ruth (Kurt Russell) trudges through the snows of Wyoming holding prisoner Daisy Domergue (Jennifer Jason Leigh), sentenced to be hanged in Red Rock. Her head is worth a pretty penny: $10,000 to be exact, dead or alive. Blizzard conditions force a pit stop at Minnie’s Haberdashery. And that ladies and gentlemen is where the eight come together, a purgatory of sorts that these heathens are never meant to leave. General Sandy Smithers (Bruce Dern) sits fireside minding his own business. Señor Bob (Demian Bichir) claims to be watching the place while Minnie is gone. Sheriff Chris Mannix (Walter Goggins) is en route to his first day as head officer of Red Rock. Oswaldo Mobray (Tim Roth) has a toothy mouth, injecting himself into many a conversations. Joe Gage (Michael Madsen) bunkers up alone, writing his life story. And finally comes Major Marquis Warren (Samuel L. Jackson), the only character with a sniffling scent of purpose or entertaining makeup. The Hateful Eight miserably fails to materialize a platform for any character to fully utilize outside of Major Warren, and the claustrophobic quarters give more mise-en-scene depth than these people do a bloodline. 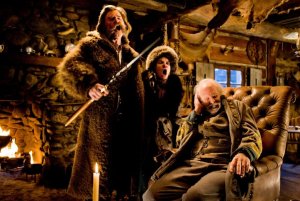 This is Tarantino we’re talking about, so we know the gore will come at some point, but when it does in The Hateful Eight I couldn’t help but wonder from what life source it had sprung. 3 hours is a long time to invest in a movie, and by the end of the film you’ll feel as if you were duped into buying penny stocks. That’s because, in all seriousness, the first 90 minutes add absolutely nothing outside of pretty pictures and underscoring Ennio Morricone’s outstanding musical compositions with derivatively mundane dialogue. Think about that. We watch an entire feature-length film just to get to something we can chew on, and even then it’s angrily chomping away at masochistic fat pawning itself off as hearty meat. I understand that there are metaphors placed throughout the picture too. An unyielding opening shot with a cross. 8 drawn horses led by a white stallion. That’s just naming a few. But they don’t matter without a deeper meaning. So by the time we get into the 4th chapter and QT superciliously introduces a narrator followed by a twist, you simply won’t, and shouldn’t care. The Hateful Eight is as clear an example that you will see this year of genius bathing in frivolity, and he’ll sit their grinning, watching you eat it up, attempting to unbox a product from a name brand that has become a box store supplier.

While I appreciate Tarantino’s fervent adoration of and decision to use real film, it’s hard not to be disappointed by The Hateful Eight. The medium that the movie is shot on should not justify shortcuts in storytelling or logic. Hell, I saw an equally visually stunning movie this year that was filmed on an iPhone, and that picture, Tangerine, just as loud and bombastic as Tarantino’s foray into the Western genre, gave real glimpses of understanding the underlying iniquities that come with living that this movie shuns. What’s missing here is tension, oddly enough, since up until this outing that was the filmmaker’s slam dunk. Nobody did the cold open better than him…until now. Nobody wrote dialogue as character specific…until now. And the irony in his big “gotcha” moments is that we’ve come to expect them. These characters remind one another not to have a laissez-faire attitude about things early on. Who knows why Tarantino didn’t abide by his own words. He has previously attracted us through stories of pessimism, cynicism, extremism. This looks to be his skeptics guide to the universe. Through too many words and gallons of blood, The Hateful Eight is Tarantino’s ode to nihilistic dysentery. Trust me, the movie is as appealing as that sounds.

“Looks can be deceiving.”