“Don’t ever think that the world owes you anything. Because it doesn’t.”

More than just about anything else I’ve seen this year, and despite my greatest efforts, Joy simply would not let me like it. This fanciful destination getaway has all of the important pieces: talented director, deep cast, compelling story. But we’re left on shore waving as the ship sails out of port. Neither a tense drama nor an outright funny comedy, Joy refuses, maybe even refutes, the idea that it needs to be about anything in particular. David O. Russell has directed this movie before, most of these actors in tow, and here the assemblage of every picture he’s made becomes a gauze dressed on an infected wound. Take the sterile garment away and you’ll see the trick behind it all. The cut is deep, but empty, with only faint trickles of clotting platelets for us to feast our eyes upon.

Joy’s opening credits bill the film with some glaringly conspicuous qualities from the start. “Inspired by the stories of daring women. One in particular.” Is this a biopic, fiction, a simmering blend of both? Oddities don’t stop there. Joy’s (Jennifer Lawrence) life story is narrated out of her hands, like everything else, by her Grandmother (Diane Ladd) who sounds like the voice of a Brothers Grimm anthology. The movie also scuffles around with Joy’s miserable existence while plunging into the TV soap opera her blank-faced Mother (Virginia Madsen) is addicted to. What’s it mean? What does this do for Joy? Nothing, really, besides stealing her limelight. Russell does family banter well and always maintains a strict hierarchical balance, yet this movie is just too bizarre for its own good. What a shame, having an opening act that will make audiences turn to their phones and run for the hills. Because it actually gets entertaining. Too little too late, I suppose.

There is very little freedom in this movie. Even when compared to the suffocating shed space of the lead character in Room, similarly named Joy, Russell’s film has a limiting sense of self-awareness. As a result, Lawrence can’t really get a handle on her character, mostly because she’s written as a do-it-all Renaissance Woman without a backbone. She stands up for herself on a number of occasions, and usually follows those scenes with exasperated belief, shocked that she actually stood up for something or anything. It doesn’t help much that the rest of the supporting cast holds the story back and her from growing. An Ex-Husband (Édgar Ramírez) who has lived in her basement for years. A jealous Stepsister (Elisabeth Röhm). And a Father (Robert De Niro) who literally says, “It’s my fault. I’m the one who gave her the confidence to think she was more than just an unemployed housewife.” These people are traps, and Joy spends so much time wasting away with them that any chance of survival gets thrown out the door. 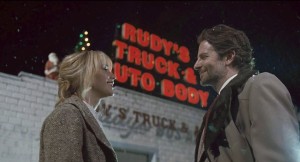 Scenes with the family are overacted, as if Lawrence opted for poorly timed cadences with her delivery just to break things up a bit. That’s not what makes her a great actress. She’s a scene-stealer and a peak performer when she just lets her hair down. That kind of charisma and energy can’t be tamed, and luckily the second act allows for some less mannered and studied role-playing. Watching her reteam with Bradley Cooper as a home network guru to pitch her Miracle Mop does everything that the revolutionary household item did so many years ago. They clean up the mess, effortlessly at that, and impart an occasional laugh or two. However, the head must be wrung out eventually, releasing all of the ugly earmarks and stains they worked so hard to absorb in the first place. Joy comes in a pretty package with an ambient score, although some careless shipping and overly ambitious handling break the most important pieces inside.

“I have to fall in love or else I’m not interested.”