“Does it make you feel dumb? Or stupid? Well, it’s supposed to.”

Based on Michael Lewis’ book of the same name, The Big Short tells the story of the ’07-’10 financial crisis. Sound boring? Yeah, that’s what I thought too. Then I went to the theater, opened my wallet, and forked over money to sit in a dirty chair in a dark room for two hours. And I was blown away. With hilarious exaggerations, painful truths, and heartbreaking losses, the movie sells itself without ever bartering or lowering its price. These are the facts, and sure, they might sting a little bit, but it’s pediatric in its execution. A quick needle to the arm and a cartoon Band-Aid instantly over the wound. That’s the genius of the picture. The material is over the majority of our heads, and then it steadies itself, explains things in layman’s terms, and gets back into the downward spiral. I could not have been more pleasantly surprised by The Big Short, easily one of the year’s very best movies. 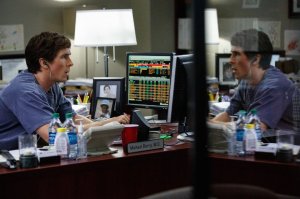 There are so many characters that they can be difficult to follow at times, so I might as well just get it over with and describe them. Dr. Michael Burry (Christian Bale) runs Scion Capital and is the first to notice the impending crisis. He prefers solitude, dresses for a day at the beach, and is usually the smartest guy in the room. Ryan Gosling stars as Jared Vennett, an employee of a big bank. He hears about the bets shorting CDO’s (Collateralized Debt Obligations) and wants in on the payday. A wrong number leads him to Mark Baum (Steve Carell) and his four-headed group of financiers. Jamie Shipley (Finn Wittrock) and Charlie Geller (John Magaro) manage a hedge fund from a garage, get turned down by all the banks on Wall Street, and stumble upon a write-up on the shorts by Vennett. The youngsters get help from retired banker Ben Rickert (Brad Pitt). The Big Short reflects the inadequacies of the workplace with its male-driven design, and highlights why that might not be such a great thing.

I know the previous paragraph is ugly and has no flow, which is what makes the movie so special. There are three distinct groups and storylines here, and even when they cross over into the other, it’s done with the separately together ideology. They are moons, revolving around the same planet whose sun is ready to explode. The Big Short should be confusing and scattered and infuriating, but I was left convinced that director Adam McKay could balance a chair on his head with both eyes closed and one leg lifted. He was the perfect choice to helm this movie. McKay’s clearly angry, and passionately informs us by waving closed fists. But he’s a funny guy, and he’s smart, so when the movie gets serious he somehow keeps things light by capably infusing comedy. He lets the crazed courtroom grow into a squall, then when he needs to he slams down his gavel with poignancy and emphasis. McKay may be known for his collaborations with Will Ferrell, but I really hope this pushes him into more serious territories. His direction borders on the profound. 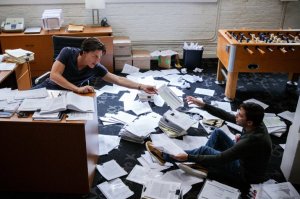 As does the editing, which should be a front-runner come awards season. The Big Short may be an ensemble piece, but it’s also very clear where each character falls on the ladder. Bale is terrific as always, yet I think Carell is the real lead of the movie, as well as the emotional tipping point through which a river of lies flows. He’s a gifted performer, here playing a man with a nose for sniffing out bullshit, at his happiest when he is unhappy. Carell’s depiction of Mark Baum is pivotal to the success of the film because he experiences the most change, and once again the actor showcases an uncanny ability to interlace farce with deeply human instincts. You look at this poster and want to call B.S. just like him. These men look too tan, sporting obvious wigs, aggrandized smirks. All of that has purpose. McKay wants us to see this true story through a magnified and glossy worldview of our fraudulent society. It’s part real, part fiction, and 100% cultural color commentary.

The Big Short comes at us in chapters, spliced together by telling quotes and carefully selected footage. At one point we read the brilliant line, “Truth is like poetry. And most people fucking hate poetry.” McKay’s movie is important, and sometimes too heady, and his relationship with viewers is so strong because he doesn’t seek to alienate or make us feel stupid. Instead he fosters teaching through remarkable visual metaphors. Margot Robbie sipping champagne in a bubble bath, explaining technical lingo. Anthony Bourdain comparing leftover fish to CDO’s. Selena Gomez playing blackjack, and how the bets aren’t just being made at the table, but stretch all the way to the back of the crowd. The Big Short remains unlike any other film you’ll see this year because it’s hysterical, informative, dramatic, and utterly heartbreaking. We’re taught that in this unfair world you rarely come out on top without others sinking to the bottom. Even sadder is that some years from now, and hopefully later than sooner, the repeated cycle of father envy and mother greed will give birth to a sequel. The Bigger Short is inevitable. The Biggest Short might just be the end.

“I’m guessing some of you still don’t really know what happened.”