“What if the stories only exist to make us believe the sea’s dark secrets?”

Is this really a movie? Can this seriously be a product meant to surpass its budget? Because if so, after the downright horrible year Warner Brothers has experienced, there is no possible way that the studio expected In the Heart of the Sea to be some rousing success. Instead the calamity rests downwind, its nose turned up at the thought of telling a convincing and interactive story for all ages. Maybe the film is not all that bad, and maybe it’s not that good, and because of its utter inability to make us care for the people or the whale things just feels a little fickle. Ron Howard’s latest feature only further cements the director as one of our most inconsistent filmmakers. This might not be his worst, but it is certainly nowhere near his Oscar worthy peak.

Howard’s film, especially when considering that this is a Disney production, tackles an interesting enough tale told through an interchangeable script. The trend of the origin story continues, and here we get the real inside scoop behind Hermin Melville’s classic Moby Dick that no one asked for. It’s one of those books everybody knows but few have actually labored through its unsettling length. Ben Whishaw plays the author, hunting after a first hand account from survivor Tom Nickerson (Brendan Gleeson). Why Melville is so passionate about writing the story is never clear outside of obsessed interest, making the their banter as forgettable as the rest of the film and its uninspired dialogue. As an audience member, it’s hard to care about such a movie when the waters are so crystal clear. We see right though its ploys, and below the surface is bare sand. We want some sustenance. Where’s the beef? 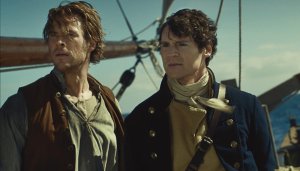 Tom reluctantly recounts his youthful days aboard the Essex in 1820. He’s a sprite lad, unhardened and untested by time spent at sea. George Pollard (Benjamin Walker) captains the ship through entitlement, but things are really run by first mate Owen Chase (Chris Hemsworth). You expect a big movie like this to stumble out of the gate because of narrow-mindedness, but In the Heart of the Sea falls flat through opposite ambitions. Simply, the movie tries to tell too much story in too broad of a scope. It can be about privilege, social placement, our thirst for oil, and detachment caused by tragedy. We wonder how men actually lived this kind of lifestyle. How they ventured off for months at a time, unsure if they’d return to dock, their fates largely at the hands of mother nature. That should be gripping. However, the film feels tired. We wish it would say something like “never let go” and really mean it, but instead all we get is a glance and a nod before plunging below the meniscus for the deep sleep.

Hemsworth certainly looks the part of Mr. Chase. Big, strapping, bellowing with might. And the actor shows commitment by transforming himself to an emaciated state when the crew becomes shipwrecked and suffer through starvation. He tries, and I commend that, but his effort to give the film reality and personality is only matched by the production design. The problem here is Howard himself. He notoriously shoots his films off-kilter for no reason, tilting his camera here and there. That’s not a bad thing when we’re going through rough waters. But to continue the technique in the calm and the quiet moments induces sea-sickness. Things are more about the director than the crew or the creature. In the Heart of the Sea tells a survival story with lush visuals through characters who you don’t give a flying you know what about. Oh yeah, did I mention there’s a big whale?