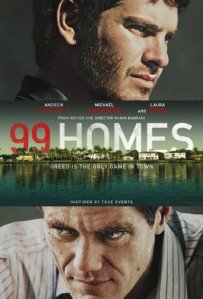 “Don’t get emotional about real estate.”

Set against the backdrop of the 2010 housing crisis, 99 Homes is a film about the haves and the have nots. About the wide-ranging financial disparity prevalent in our country and the lack of communication and understanding between both social extremities. Those on top often cast their glazed over gaze down in pity while those on the bottom look up in disdain. That’s really what this story wants to convey, and it does so with heartbreaking results. 99 Homes vocalizes the basic meaning of home and reminds us that sometimes simply living is just too damn hard. The above quote tells us to keep our distance, but it’s impossible to do so when you’re watching such a smooth, tense and harrowing film.

Andrew Garfield stars as Dennis Nash. A single parent supporting his son and his mother, Dennis goes wherever it is in his home state of Florida to make a couple bucks. He does construction, plumbing, concrete, you name it. 99 Homes can be incredibly sad because, as is often the case in real life, Dennis’ efforts do not always pay off. Sometimes you can put in the hard work and reap none of the benefits, and here it leads to the family house going into foreclosure. It’s where his mom lived, where he has always lived, and where he wants to raise his son. Knocking on their door are two police officers joined by Rick Carver (Michael Shannon), a real estate broker making his living off of the misfortunes of others. I urge you to not watch the trailer below and head into the film knowing as little as possible. You’ll be unsure where the story is going to go and you’ll be surprised by the route that it takes. 99 Homes, save for its ending, is one of the best scripted films of the year.

Ramin Bahrani is the writer and director on this picture. If you’ve seen any of his work, you’re well aware that he utilizes unique situations to populate with his characters in order to reveal something about them. His use of non-actor talent brings the kind of naturalness of a David Gordon Green film and the tension he builds here is reminiscent of Sidney Lumet. That’s high praise and great company, and although Bahrani is still young, he has proved his formidable talent for storytelling and established his name among the best working today. 99 Homes has some abrupt transitions and has a handful of scenes mistakenly cut short, but it at least recognizes those decisions and consistently adheres to its own style. While never short on messages to harp, the film can feel a little conflated, advocating so many different worthy subtexts that none ever takes the reins. But that shows the confusion and the drama and the plight of our characters, primarily Dennis. The ending concedes enmity and does not do justice to what comes before, yet 99 Homes still evokes empathy, and that’s one of cinema’s greatest and most treasured tools.

Everyone has a story. We have excuses, explanations, answers and questions. All of these attributes are beautifully articulated by both Garfield and Shannon. I’d say that this is up there with Garfield’s best work, including such riveting performances in The Social Network and Never Let Me Go. This is a mere step forward in his promising and already fruitful career. 99 Homes heavily relies on its actors to bring it to life and there are few better than Michael Shannon to do so. Shannon is one of the best American actors, a naturally intimidating and frightening man with enough competence to give his monsters a heart. He may be typecast in roles like this, but they work because of his methodical approach. Why this man is not one of our most heralded and awarded actors is beyond me, and I would be shocked if he isn’t nominated for this role. A single monologue he gives is up there with the best acting of the year. Rick Carver is a character you remember because of his malice, his greed, and his justifiable reasoning for both. 99 Homes is, strangely enough, a grand little success in spite of its own missteps, and gives us a story that all too many can directly relate to. If you learn anything from it, maybe we should take away that sometimes you have to swim with sharks to survive. Or maybe better yet, drown without moral compromise.

“America doesn’t bail out the losers. America was built by bailing out winners.”